The Old Man & the Gun creaks along in predictable fashion, but Redford displays wary charm. 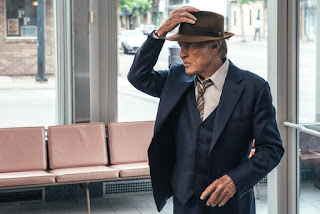 There's one compelling reason to see The Old Man & the Gun. The movie stars Robert Redford who says that his performance as real-life bank robber Forrest Tucker is his last. Now 82, Redford has told interviewers that he plans to devote his time to directing and environmental causes. He's also still the driving force behind The Sundance Film Festival.

When I say that Redford provides the only reason to see The Old Man & the Gun, it's because he creates a reliably agreeable portrait of a thief who devotes his life either to holding up banks or escaping from prison, a feat he accomplished 16 times.

Full of wary charm, Redford's portrayal of Tucker arrives sans all traces of malice or evil.

I don't know if that makes sense for the subject matter, but Redford's fans should be able to regard this performance as a pleasing valedictory to great career.

Director David Lowery (Ghost Story), who wrote the screenplay based on a New Yorker article by David Grann, builds Redford's character around a single, disarming trait: Tucker is ultra polite and friendly during his robberies. The people he holds up (bank managers and tellers) all seem to take away positive impressions of this grand larcenist.

The rest of the cast includes Danny Glover and Tom Waits as a couple of Tucker's accomplices.
Sissy Spacek plays a widow who is charmed by Tucker, although she's not ready to abandon her life for him.

I suppose every robber needs a nemesis. In this case, the job goes to Casey Affleck, who appeared in Ghost Story. Affleck portrays Texas detective John Hunt, a man who made it his business to track Tucker.

Despite some nice scenes between Spacek and Redford, The Old Man & the Gun feels like a slightly creaky version of a movie we've seen before. And if this is Redford's last movie, I wish he had been chosen something a bit more challenging.

I feel guilty saying that because Redford certainly has earned the right to do whatever he wants; for me, he's been an exciting screen presence since I first saw him in movies such as Inside Daisy Glover (1964) and The Chase (1966).

I hope, at a minimum, that Redford doesn't give up on directing because a movie world without Robert Redford in it seems like a very bad idea.