A Star is Born dazzles before it dwindles. 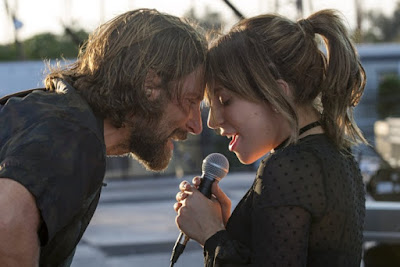 Cooper's take on a story that has been told on screen three times before features musical high points from Lady Gaga, who Cooper generously showcases. It's as if Cooper understands that the paying customers want to see Gaga soar or sink and he gives them plenty of room to decide in which direction she's headed.

Displaying talents that evoke images of everyone from Judy Garland to Janis Joplin to Barbra Streisand (of the last version) and maybe even a little Alice Cooper, Lady Gaga -- the erstwhile Stefani Joanne Angelina Germanotta -- holds the screen, even when her acting proves a bit shaky.

It's difficult to imagine that anyone could be unfamiliar with a narrative arc that's only slightly less shopworn than Auld Lang Syne on New Year’s Eve. Cooper follows the outline of Streisand's 1976 version, kicking the tale into the world of rock and pop stardom. He's sinking. She's rising. Everyone knows the drill.

Cooper plays Jackson Maine, a talented but fading country rocker with a massive alcohol problem. After a concert, Jackson polishes off a bottle in his chauffeured ride. But he's so badly in need of another drink that he stumbles into a drag bar where Lady Gaga's Ally is performing. The only female who's allowed on stage, she delivers a knock-out version of La Vie En Rose.

After her performance, Jackson and Ally spend a night hanging out and Ally confides that her singing career might be stalled because her nose is too big. He says he loves her nose. He recognizes that she has the potential to be a star, a view we readily share because ... well ... she's Lady Gaga.

Interested and smitten, the soft-spoken Jackson pulls Ally into his world, soon sending a private jet to pick her up for one of his concerts.

It doesn't take long for the transformative moment to arise. Jackson pulls Ally on stage. She's nervous, but she kills. And her talent begins to charge his batteries, too. After years of touring drudgery, Jackson seems to be having fun again.

Jackson and Ally work together -- until the point where an ambitious manager (Rafi Gavron) convinces Ally that she can rocket past her musical partner and love interest if she strikes out on her own.

Ally's ascendance parallels Jackson's decline, but when it comes to sinking into an alcoholic swamp, Jackson needs no help. He spirals downward during an overly long decline that reaches its low point when he embarrasses Ally at the Grammys, a scene that's bound to make an audience cringe at Jackson's pathetic degeneration.

To further underscore Jackson's march toward musical irrelevance, he also develops tinnitus, a condition that interferes with his singing and guitar playing.

A bearded, red-faced Cooper keeps his eyes downcast and drops his speaking voice to bass levels. Cooper plays Jackson's smoldering, nonchalant sexiness for all its worth, interrupting a display of cowboy charm with bouts of fall-down drunkenness. He's reasonably convincing doing his own singing.

There isn't much by way of a supporting cast in this Cooper/Gaga duet. Sam Elliott, a reliable symbol of country authenticity with a voice as deep and mellow as a summer afternoon, shows up as Jackson's brother Bobby, the guy who also manages the singer's road tours. The brothers eventually get crosswise and Elliott disappears.

Andrew Dice Clay portrays Ally's father, a failed crooner who wants Ally to achieve the stardom that eluded him.

Dave Chappelle shows up -- more or less out of nowhere -- offering a calming turn as one of Jackson's former buddies; he literally picks Jackson out of the gutter during one of his worst benders.

A Star is Born has a sustained imbalance that may result from its odd match of talents. Cooper is an actor; Lady Gaga is a phenomenon. He's in his actor's world. She's in her pop phenomenon world. It's possible to argue, I suppose, that the clash makes sense for a movie in which Ally's success is destined to eclipse Jackson's.

A Star is Born has entertaining moments to be sure, but there's no star born here. Lady Gaga is a star from the moment we first see her. Cooper's high immersion performance notwithstanding, Lady Gaga remains the movie's main attraction, even when she appears without any of her trademark makeup.

As a director, Cooper likes a funky, handheld camera. During the musical numbers, A Star is Born can feel like an energetic concert film -- albeit one that's interrupted by a story.

If you're up for a pop-cultural fairy tale, A Star is Born probably will get the job done. It struck me as more of a high-wire performance act than a look at two memorable characters. The perils of celebrity and alcoholism and an unlikely romance become supports for Cooper and Lady Gaga to "put it all out there," if you'll excuse some vernacular.

It strikes me that the movie also is about Cooper and Lady Gaga taking turns trying to charm the audience -- him with low-down, shaggy dereliction that screams out for salvage and her with a mixture of daring and talent that defies you not to pay attention.

It's all a bit overamped, an entertainment that's a little too in love with itself to bring down the curtain -- even as its two-hour and 15-minute length begins to wear. And dialogue about the need for authenticity in music didn't convince me that there wasn't a lot more show than substance in Cooper's collection of riffs, tiffs, and musical striving.