Skateboarding his way into acceptance

Actor Jonah Hill makes an interesting directorial debut with mid90s, a movie about a kid looking for a place in the world. 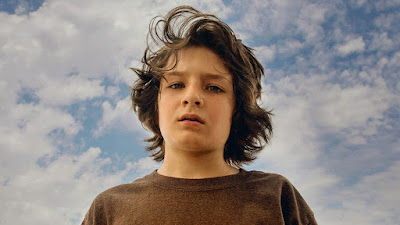 Although mid90s, the directorial debut of actor Jonah Hill, deals with Los Angeles' skateboard culture during the 1990s, the movie isn't a flashy accumulation of tricks, stunts and teenage daring. That's because there's something touching at the heart of Hill's directorial debut, the loneliness of a 13-year-old boy with a bully for a brother and a desire to be accepted by his peers.

Sunny Suljic portrays Stevie, a kid who finds that acceptance among a diverse group of skateboarders who offer Stevie escape from his surroundings, a single mom (Katherine Waterston) who had kids too early and an older brother (Lucas Hedges) who regularly beats him up.

Before I saw mid90s, I worried that Hill, who also wrote the screenplay, would be hitchhiking off skateboard culture, siphoning off its language and energy and calling it his own. But by using a convincing cast of actors and by excavating memories of a scene in which he once participated, Hill takes us on an authentic and entertaining foray into the lives of teenagers who essentially are growing up on their own.

Stevie falls in with a rough and ready bunch after being introduced to the group by Ruben (Gio Galacia), a kid who instructs Stevie never to thank him. Thanks are for "gays," says Ruben. Take that as part of the posturing that seems to come naturally to these young men. As one of the youngest in his crew, Ruben's needs to present a tough front. You can almost feel him straining to prove himself and he probably lures Stevie into the group so that someone else can play the goat role.

Suljic goes through much of the movie with a smile pasted on his face; it's a kid-in-the-candy-store look of a young man who's learning about a world that opens its doors to him as the boys school him the ways of skateboarding, although it left me wondering whether Suljic's performance could have benefited from some shading.

The skateboard crew is a scruffy bunch. Olan Prenatt portrays a curly-haired kid who saunters his way into a drinking problem. Na-kel Smith portrays Ray, a kid who aspires to go pro with his skateboarding career. It should give you a clue as to the movie's impolite tone that Prenatt's character is named "Fuckshit."

The skateboarder nicknamed "Fourth Grade" (Ryder McLaughlin) constantly takes videos of the group, a motif that results in a late-picture payoff.

Hill obtains mostly credible performances from his young cast. Hedges (Manchester by the Sea, Lady Bird, and Three Billboards Outside Ebbing, Missouri) seems to be on a different level than the rest, adding a bruised emotional life to his portrayal of Stevie's brutalizing older brother, Ian. Stevie, who sometimes sneaks into his brother's room, which he regards reverentially, may be too young to understand his brother's torments.

Hill seems most concerned with Stevie's ability to find a place among his peers while taking his lumps. At one point, Ray tells Stevie that he has an unrivaled capacity for absorbing "hits." Stevie brims with pride even though Ray has enough maturity to know that Stevie doesn't really have to beat himself up to prove his worth.

These kids thrive on taunting one another and they aren't exactly role models when it comes to the girls they encounter. But they're also capable of surprising displays of tenderness and humanity, shown in a respectful encounter with a homeless man and in a scene in which Ray consoles Stevie after he's humiliated in front of the group by his irate mother. She's furious that the boys have introduced Stevie to drinking and pot.

That scene ends with Ray urging Stevie back onto his skateboard and onto the street where they coast along. And that, it seems to me is what the movie's really about: the way -- at certain times in one's life -- there's nothing better than friends, hitting the streets and finding a groove that makes you feel a little more at home in a world that hurts more than you're ever willing to admit.