A teenager faces a crisis of conscience

The Hate U Give highlights racial problems without sacrificing the humanity of its characters. 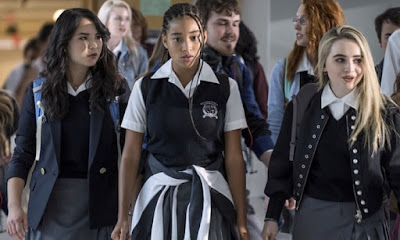 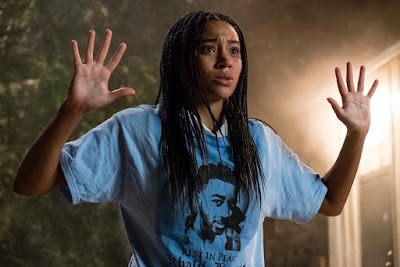 The two photos above make a key point about the new movie The Hate U Give, an adaptation of a young adult novel by Angee Thomas. One photo shows actress Amandla Stenberg as a character who attends a tony private school, has a white boyfriend and white girlfriends. The other photo shows the same teenager in her neighborhood after a traffic stop results in the shooting of one of her friends by a cop.

The same teenager, different circumstances. That's part of what drives this involving look at a high school student battling with social and personal issues and the powerful ways in which those issues can intersect.

There's enough material in The Hate U Give to create a mini-series -- and it's possible that Thomas's novel would have been better served in such an extended format. That doesn't mean that you shouldn't see a movie that deals convincingly with many real issues, mostly without subordinating the humanity of its characters to the art of scoring political points.

Stenberg's Starr Carter has a strong family life. Her mother (Regina Hall) believes in education and tries to shield her kids from the worst temptations of the neighborhood where the family lives. Her dad (Russell Hornsby) instills Starr with pride in her blackness. As a man who served a prison term, he understands the code of the streets. He also owns the neighborhood grocery store and has committed himself to the Garden Heights section of a city the movie never names.

The pivotal action occurs when Starr meets an old friend Kahlil (Algee Smith) at a neighborhood house party. Later that night, she becomes a witness to Kahlil's killing by a policeman, a traumatic event that reverberates throughout the rest of the movie.

A neighborhood drug dealer (Anthony Mackie) has an interest in keeping Starr from telling her story in court. Unable to find employment elsewhere, Kahlil worked for the drug dealer at a very low level.

Working from a screenplay by Audrey Wells, director George Tillman, Jr. has made a movie that speaks to the complexities of racial issues in America. Starr's white boyfriend Chris (K.J. Apa) is well-meaning but not always attuned to Starr's existence as a black kid. And it's not all his fault, either. Starr has done a good job of keeping the two parts of her life separate.

Starr's best white girlfriend Kayleigh (Sabrina Carpenter) has appropriated black styles of speech, but her understanding of black life stays pretty much on the surface.

Starr herself sees the educational advantage of attending a private school. According to her own description, the public high school she would have attended is a place "you go to get drunk, high, pregnant or killed."

The movie also includes the presence of a black policeman (Common). Common's Carlos, who's also Starr's uncle, tries to make a reasonable case for why the white officer behaved as he did when he pulled Kahlil over.

Tillman obtains strong performances from a deeply committed cast led by Stenberg, who embodies the often contradictory poles of Starr's identity with intelligence, determination and appropriate amounts of consternation.

The Hate U Give maintains a terrific sense of what's at stake in every moment, even as it tries to corral every topical issue it can find. Perhaps that's the point. Young black people can't necessarily dodge any of these issues and The Hate U Give becomes a film that takes a powerful look at how one young woman tries to achieve her measure of success without abandoning her sense of self.