Mass murder in Norway and its aftermath 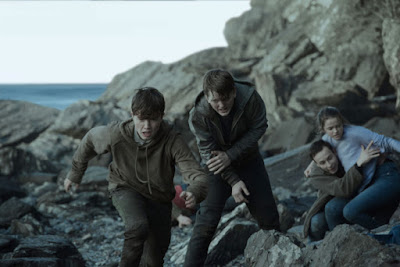 With interruptions for several Bourne movies, director Paul Greengrass has become one of cinema's ablest chroniclers of catastrophe, creating a filmography that includes Bloody Sunday (2002), United 93 (2006), and Captain Phillips (2013), films that dealt with political upheaval, violence or outright terror.

This year brings us Greengrass's 22 July, an examination of the 2011 attack in which 77 Norwegians, most of them teenagers, were murdered by a white nationalist who claimed to be a soldier in the battle to save Europe from what he viewed as liberal elitist multiculturalism. The murderer resented the presence of Muslim immigrants in his country.

Eight of the victims were killed by an explosion outside a government building; 69 of them were murdered while attending a Labor Party youth camp on the island of Utoya, picked off as the killer freely roamed the campgrounds. No helicopter was available to drop police into the bloody fray.

Filming in English with a Scandinavian cast, Greengrass begins with the day of the mass murders. Soon-to-be murderer Anders Behring Breivik (chillingly played by Anders Danielsen Lie) disguises himself as a policeman to carry out his lethal rampage. After setting off an explosion in Oslo, Breivik proceeded to Utoya. He gained access to a ferry from the mainland by claiming he had been sent to secure the island for young people already alarmed by shocking news of the Oslo explosion.

Greengrass vividly presents Breivik's murders within roughly the first half hour of a film that runs for an overly long 143 minutes. 22 July then turns into a drama that deals mostly with the aftermath of the shootings, an intermittently effective catalog of the painful consequences that included Breivik's trial.

Greengrass recreates the chaotic atmosphere surrounding the shootings, but simplifies the story by concentrating on Breivik, the conflicted attorney who defended him (Jon Oigarden) and a young survivor (Jonas Strand Gravli), a horribly wounded 17-year-old whose grueling recovery is rendered with agonizing detail.

Arrogance allowed Breivik to cast himself as a hero; he imagined himself a vanguard figure in what he believed would be a war to restore white supremacy in Europe. After terrorizing the kids on Utoya, he surrendered to police without a fight.

Greengrass presents a mini portrait of a man so certain of himself that he has the gall to complain to the police that they're not tending to a cut he sustained during the shooting. A flying skull fragment from one of his victims injured a finger. The murderer needed a small bandage; his victims weren't so lucky.

Despite Lie's compelling performance, there isn't a whole lot to understand about Breivik or his deluded sense of superiority.

As a legal drama, 22 July hinges on Breivik's decision to scrap an insanity defense that would have replaced a prison sentence with confinement to a mental institution. Breivik insists on having his day in court so that he can control his own narrative. He wants a platform to present himself as a warrior of the far-right.

I confess to wondering exactly why this horrific story needed to be rehashed on screen. It is, of course, a cautionary tale about the toxicity of racist resentment and paranoia. I also speculated that Greengrass may have wanted us to remember this particular atrocity before it washes from our cultural memory bank, swept away by the stream of additional shootings that since have grabbed headlines.

Perhaps Greengrass would have come closer had he been able to pull a stronger statement from this fractured, combustible and often disturbing movie.