A family deals with Alzheimer's

Hilary Swank leads a strong cast in the drama What They Had. 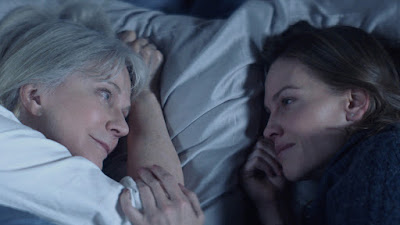 There's no faulting the acting in writer/director Elizabeth Chomko's What They Had, a story about the impact of Alzheimer's on a family already dealing with typical issues of generational conflict and parental approval.

Hilary Swank portrays Bridget, a woman who travels with her teenage daughter (Taissa Farmiga) from California to Chicago when her brother (Michael Shannon) asks for help.

Shannon's Nicky, who remained in Chicago, has cared for his mother (Blythe Danner) and father (Robert Forster) but he's reached the end of his rope. Danner's Ruth has wandered off in her nightgown on a cold Chicago night and the family is frantic about the harm that might befall her. The drama centers on what to do about Ruth, a once-competent woman who's increasingly removed from reality and who soon turns up unharmed.

Forster's Bert resists putting his wife in memory care, even if he can live a nearby assisted living facility that would allow him to visit at will. He refuses to let go of his marriage and insists that he's perfectly capable of taking care of Danner's Ruth by himself.

Shannon gets a much-needed opportunity to play a normal guy -- albeit one who's struggling with and frustrated by difficult problems. Shannon's Nicky owns a bar that's not doing as well as he'd hoped. He's constantly battling with his father. Dad berates Nicky for not finishing college and becoming a bartender. It means nothing to Dad that his son owns the bar.

Forster, in fine form, plays an ardent Catholic, a down-to-earth guy who believes in marriage as an "until-death-do-us-part" proposition? Bert isn't one for nuance, but he's never treated like an idiot. Forster keeps him real and helps us understand that Bert can't reconcile his memories of better days with the situation in which he now finds himself.

Swank's Bridget seems conflicted about nearly everything: her role as a mother, her daughter's refusal to enroll in college and her relationship with the husband (a briefly seen Josh Lucas) she left in LA.

It's hardly a surprise to say that the always impressive Shannon gives a strong performance, but he does. He captures Nicky’s genuine concern and snide humor, as well as his fury.

Danner plays a wife and mother convincingly addled by her medical condition, yet still showing traces of a woman who's able to laugh at herself.

Not every moment in What They Had rang true to me. Bridget's listless marriage, for example, receives too little attention to make it a convincing part of the story. But the movie never feels less than fully lived-in by a cast that couldn't be any better.