They want to have a baby 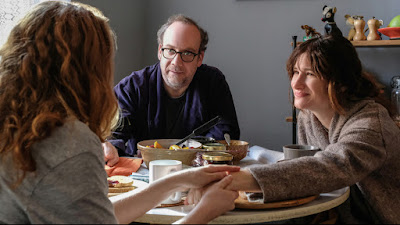 In Private Life, Paul Giamatti and Kathryn Hahn play a married couple who have spent years trying to have a baby. As a couple in their 40s, they're facing a difficult reality; their lives are beginning to lose all traces of youthful promise.

Clever, smart and entertaining, Private Life provides the perfect vehicle for director Tamara Jenkins to return to the screen after more than a decade. Jenkins' The Savages (2007) featured Philip Seymour Hoffman and Laura Linney as adult siblings trying to cope with a demented father.

In this outing, Jenkins turns her attention to a frustrated New York couple we get to know well, and who are so life-sized you feel as if they might live next door, providing you live in New York’s East Village.

After so much failure, it seems logical to wonder why Hahn's Rachel and Giamatti's Richard want to bring a child into their lives. The answer, as I’ve suggested, may lie in the fact that they're an attractive couple who seem to have reached their career limits.

The theater company Richard runs isn't going to make him rich or famous. Neither is the pickle company he operates to keep bread and butter on the table. Rachel's trips to Yaddo, a prestigious artists' colony, haven't pushed her to the top of the literary world. Richard and Rachel still live in a cramped apartment where the upstairs neighbor plays music that booms through the floorboards.

A child might mark Rachel and Richard's last way to leave something tangible behind but their lives have degenerated into a series of injections (administered by him), ovulation-cycle watching and visits to specialists. And, yes, Richard and Rachel also are in the process of trying to a adopt.

Striving for pregnancy has begun to look like penance for undisclosed sins or, at very least, a full-time job.

The movie's plot finally leads the couple to consider using Richard's sperm to fertilize a donor egg. Because Rachel would carry the baby, a donor might represent the closest the couple can get to biological reproduction.

Richard often turns to his brother Charlie (John Carroll Lynch) for money; Charlie's wife (Molly Shannon) is sick of hearing about Richard and Rachel's problems, another source of low-key tension.

Once an initially reluctant Rachel agrees to use a donor egg, it falls to Charlie and Rachel's daughter Sadie (Kayli Carter) to become the donor. Sadie has left college to move in with Richard and Rachel. An aspiring writer, Sadie thinks Richard and Rachel are "cool,'' a conclusion only a 25-year-old could draw about a couple that's suffering from the kind of life exhaustion that shows up just before the skin begins to wrinkle.

Jenkins writes with wit and Giamatti and Hahn create characters who are intelligent and credible.

You don't have to have had any experience with the difficulties of getting pregnant to enjoy a comedy that is saved from charges of urbane preciousnesses by Giamatti and Hahn. They're each blessed with the ability to create characters who are believably self-aware and who never push us so far away that we can't appreciate their full, rich and often annoying selves.