A new take on an old character

It boasts a beautifully mounted production, but this telling of Hamlet's story from Ophelia's point-of-view falls short. 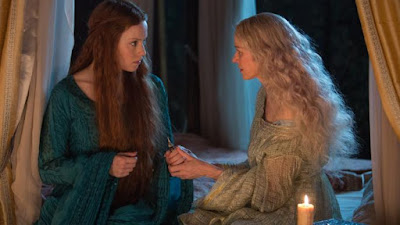 Say this: director Claire McCarthy has made a beautifully appointed and carefully staged Ophelia, a lush adaptation of a Lisa Klein novel that tells Hamlet's story from Ophelia's point of view.

In McCarthy's Shakespearean inside-outing, Star Wars star Daisy Ridley portrays Ophelia, who -- in this version -- emerges a strong figure from the classic story about a Danish prince who can't make up his mind whether to be or not to be. But is Ophelia anything more than a gimmicky costume drama? That's the question.

The answer: Not entirely.

Early on, Queen Gertrude (Namoi Watts) selects Ophelia as one of her ladies-in-waiting. Before Hamlet (George MacKay) prepares to leave Elsinore, he begins flirting with Ophelia; it's clear that he's smitten.

To arrive where she wants to go -- the emergence of Ophelia as an independent force -- MacKay must alter the original story. Among other things, we learn that Gertrude has a long-lost sister who's also a potion-dispensing witch (also played by Watts). The witch becomes instrumental in the plot -- albeit not in predictable ways.

Meanwhile, Gertrude fights the temptation to start an affair with the king's brother (Clive Owen). Owen's Claudius -- in the midst of what looks like a series of epic bad hair days -- has designs on the throne. Once the king has been dispatched, he takes Gertrude as his queen.

The character of Ophelia has been modernized in ways that can seem a bit too on-the-nose. She can read and knows how to stand up for herself. She cautions the brooding Hamlet not to toy with her affections. Ophelia represents the antithesis of courtly hypocrisy; a straightforward young woman, she refuses to play games.

Tom Felton, of the Harry Potter movies, portrays Laertes; Dominic Mafham plays Polonius; and Devon Terrell appears as Horatio. All are more or less relegated to secondary figures but are made more interesting by comparing their portrayals to what we might have seen in past productions of Hamlet.

Shot in the Czech Republic, Ophelia looks great but its beauty can't overcome the movie's two big problems. Half the time, you may find yourself trying to connect the events on screen to those you remember from Shakespeare's play.

The other problem: The story seems to have been engineered as much as written. I'd have preferred to have seen the chips (not to mention the story's numerous corpses) land where they might have fallen. Instead, I was distracted by the strain of the plot manipulations that bring Ophelia's story into focus and sometimes make the characters feel more contrived than real.

True, this Ophelia is not Shakespeare's girl of the middle ages, but it is refreshing that she dares to be shown as a strong person. And why not?
There were strong women from ancient times though seldom portrayed as such - either because they were the exceptions or because men wrote about them - or both. I liked that the story tried to cover the story of Hamlet as close as possible, even using Shakespearean language at times. I think the picture of this Ophelia is believable.
And the atmosphere and the clothes were great.
Perhaps. not an A+ show, who could top William Shakespeare? but the acting was very good and makes one think as well as enjoy, watching it.