A tribute to the imagination of a director 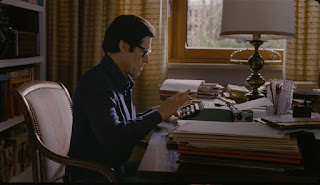 Pasolini's story can be as intriguing as his movies. The director was found dead on a beach in 1975. Seventeen-year-old Giuseppe Pelosi confessed to the brutal murder, which Ferrara depicts as an extreme act of homophobic rage. Pelosi eventually retracted his confession, and Pasolini's death remains a source of speculation. He had plenty of enemies -- from censorious haters of the sexuality in his films to detractors who abhorred his politics.

Ferrara uses the days leading up to Pasolini's death as a springboard for exploring the imagination of a director who also was a novelist and poet. There was Pasolini's work and then there was the man. Pasolini became a champion of independent-minded art that refused to bow at the altar of social convention.

Ferrara also explores Pasolini's view that every bit of humanity was being wrung out of people by corporate and industrial forces and by their own acquisitiveness. There are no more humans, Pasolini tells an interviewer at one point. The interviewer says that he finds piercing moments of light in Pasolini's work doesn't fully understand them. You may find yourself saying the same about Ferrara's movie.

In ways that unbalance us, the movie includes snippets from a film that Pasolini proposed to make. Ferrara begins with a reference to Salo or the 120 Days of Sodom, Pasolini's last film, a work that was excoriated by some for its graphic, humiliating depictions of sexual exploitation.

Pasolini thoughtfully watches a scene from the film, his demeanor suggesting that he's far more interested in its political implications than in its explicitness.

We also learn that Pasolini lived with his mother (Adriana Asti) and a cousin (Giada Colagrande). His home life appears to be calm, even reflective. He also liked to prowl Rome's streets at night looking for sex, a pursuit that may have led to his demise.

Pasolini's films (from The Gospel According to St. Matthew to The Decameron to Arabian Nights) won him admiration from critics, cineastes and perhaps even from his fellow countrymen. People never have been shy about expressing pride in the renown of certain artists -- even if they don't always understand or approve of them.

Pasolini includes sex and violence but Ferrara (best known for movies such as King of New York, Bad Lieutenant and The Addiction) seems in a reflective mood himself.

Is Pasolini about an important Italian filmmaker, about the Ferrara views of the role of artists or about Pasolini's belief that humanity was poised on the edge of an especially dangerous moment? Perhaps all of the above.

It would be impossible and also unforgivable not to say more about Dafoe's performance. Dafoe not only wears Pasolini's clothes but internalizes his spirit. He even holds our attention when Ferrara shows Pasolini sitting at his typewriter, pounding away at a screenplay.

Think what you will about Pasolini, but know that Dafoe, who speaks in English here and who last played Van Gogh in Julian Schnabel's At Eternity's Gate, is a gift to every director who wants to push the medium's boundaries -- and cinema lovers, as well. Movies would be poorer, staider and less challenging without him.