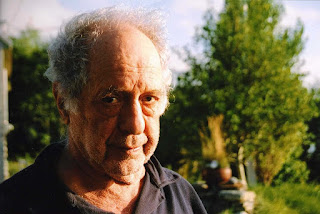 The photographer and documentary filmmaker Robert Frank, now 93, occasionally makes for good company in the documentary Leaving home, Coming Home: A Portrait of Robert Frank. I say "occasionally" because Frank can be cranky and also brutally honest. He doesn't sugarcoat, describing old age as a catastrophe of bodily degeneration. He's not a guy to look to if you're seeking consolation. Frank's career blossomed when he published a book of photographs called The Americans. Frank had traveled across the U.S., getting to know his adopted country. (He was born in Zurich.) He had an eye for desolation. That may be why Frank's collection of 83 photographs wasn't well-received by those critics who found his images overly harsh. Drawn to scenes of disconnection and loneliness, Frank also allied himself with the Beat movement. Jack Kerouac and Allen Ginsberg were friends. He lived in New York City, married had children (a son and daughter preceded him in death) and spent much of his life looking at the world through a lens. Fox makes good use of some of Frank's photos and clips from a variety of his documentaries, most of them personal and disinterested in anything that might be deemed "slick" or "formalistic." We also meet Frank's second wife, Jean Leaf, herself a painter and sculptor. The film captures Frank's artistry and also makes clear the pain of a life devoted to seeing clearly. Directed by Gerald Fox, Leaving Home first appeared in 2004 on The South Bank Show, a British TV program.
Posted by Robert Denerstein at 2:10 PM