The Shaft family adds another generation

The new version of Shaft can be funny and brash, but it's also scattered and its unashamed political incorrectness can be grating. 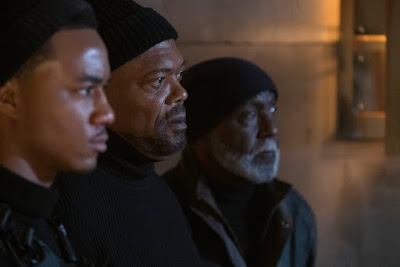 One of them is hopelessly old school. That means he’s homophobic and misogynistic. He has built a reputation on the streets with his fists, his guns and a take-no-prisoners attitude.

The other is a millennial, an MIT graduate who works in data analysis at the FBI. He’s brainy and culturally adept, comfortable with the social fluidity of a multicultural world.

The gimmick: Both are named Shaft. They're father and son.

John Shaft, you’ll recall is the iconic black detective who emerged in the 1970s as part of the Blaxploitation wave that kept turnstiles spinning. In director Tim Story's new version of Shaft, the youngest Shaft (Jessie Usher) hasn't seen his rogue father in years.

The twist: The son must turn to his street-wise dad for help in discovering who murdered his best friend, a Muslim veteran (Avan Jogia) who seemed to be getting his life together after going through a difficult time with drugs.

I’m not sure what Story had in mind with this new version of Shaft, which checks so many boxes you might call it with a multiple choice movie. It’s a buddy comedy (albeit between father and son), an action thriller with a plot that’s so disposable you don’t really need to follow it, a generational comedy in which a son continually taps the breaks on his father’s out-dated, politically incorrect views on women and gays, as well as a movie that features high-caliber weapons taking out what can seem like hordes of bad guys.

Samuel L. Jackson portrays Shaft, as he did in director John Singleton’s 2004 entry into the Shaft series. The role, of course, dates back to the 1971 original and a variety of sequels starring Richard Roundtree, who makes a movie-stealing appearance late in this edition.

To reiterate: Jackson's Shaft is the son of Roundtree's Shaft and the father of Usher's Shaft. Got it?

Here’s something to consider. Jackson is 70. Roundtree is 76. The movie tells us Jackson’s Shaft is 60. Even at that, the math doesn’t quite work. Oh well, looking for realism in this version of Shaft is about as useful as thinking you’re going to get through the movie without a substantial quotient of MF expletives. If you don’t know what I’m talking about, you have no business seeing the movie anyway.

Jackson has played variations of this character before; his performance not only reprises his previous work as Shaft but includes echoes of Jules, the hitman he played in Pulp Fiction.

All of this results in a hit-and-miss affair, a movie that's probably best seen with a large audience that’s willing to get raucous — roughly in the way the ‘70s movies were received.

Story tries to evoke ‘70s nostalgia with Shaft’s throwback attitudes, with a score that makes ample use of the Isaac Hayes' theme from the original and with an immersion in the mean streets of Harlem -- not to mention the suede dusters you see all three characters wearing in the movie's sequel-promising final shot.

Usher makes a fine foil for Jackson, slowly emerging as something less than the guy his father accuses him of being. Jokes about whether Usher's JJ can be called a "real" man embody the movie’s conflicted spirit. Yes, some of these jokes can be taken as insulting and even homophobic. I guess they're supposed to explain how an out-of-touch father tries to taunt a son who grew up with his mother and who's fluent in the language of the 21st century.

So can these two men find a single page on which both can thrive — and, oh yeah, solve the mystery at the movie’s core?

You already know the answer. Turns out that Shaft the Younger is skilled with guns and well-trained in a Brazilian form of martial arts and both men are capable of laying out their enemies without feeling an iota of compunction about taking human lives.

Women in Shaft basically serve the plot. Mom (Regina Hall) isn’t around for much of the movie; young shaft’s love interest (Alexandra Shipp) has a bit more to do. But when they do appear, these women have no trouble establishing their presence, claiming equal footing with the male characters.

Did I laugh at some of the comedy? Yes. Did I find the violence excessive and not stylish enough to turn into something that could be appreciated purely on cinematic terms, as we might in a John Wick movie? Yes to that, as well. Were the jokes about gays a bit repetitive? Yes, again. Did the movie get better when Roundtree finally makes his appearance? Another yes. Was there at least one piece of action that caught me by surprise. Well, there would have been had I not already seen it in the movie's trailer.

So where do I stand on Shaft?

The whole movie may be too preposterous to take offense; remember Story also directed two Ride Along movies. But know this as well, there’s no character here who’s likely to attain the iconic status of the original Shaft. That movie was tightly wedded to its time. This one is less of its time than it is a spawn of dozens of other movies. As I said at the outset, a box checker.

How much you enjoy it depends on how many of those boxes you're able to check.