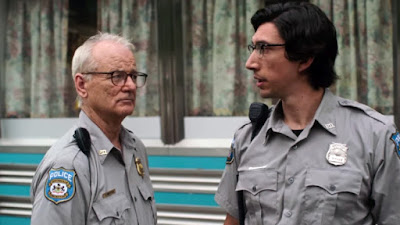 Every now and again, I come across a movie that I watch without being able to form much of a connection. That certainly was the case with The Dead Don't Die, director Jim Jarmusch's belated entry into the world of zombie movies. Employing a cast led by Bill Murray, Adam Driver, and Chloe Sevigny -- all of whom play small-town cops — Jarmusch deadpans his way through a dreary foray to a small town where the dead are popping up from their graves. There's little point making this kind of movie without taking aim at a decaying world. To that end, Steve Buscemi portrays a racist farmer who wears a "Keep America White Again" hat, a take on ... well ... you know. Strange things begin to happen in the tiny fictional town of Centerville and it doesn't take long for the dead to begin chewing on the living. Murray and Driver display little emotion as the movie progresses. Tilda Swinton adds to the weirdness quotient. She shows up as the town's mortician, a woman who also happens to wield a mean samurai sword. At one point, Jarmusch shatters convention. Driver's Ronnie justifies his gloomy outlook by telling Murray's character that he knows things will end badly because he’s read the script. Jim, he says, showed it to him. Oh, I forgot to mention that Tom Waits portrays a hermit who wanders through the woods outside of town and that Danny Glover appears as the owner of the town's hardware store. The idea of riffing on zombie movies, a deadened American culture, global warming, and small-town insularity isn't exactly new. Because The Dead Don't Die was selected as the opening offering of the Cannes Film Festival, I expected a more robust movie -- even if that movie kept faith with Jarmusch's low-key style. The Dead May Not Die, but this movie sometimes feels as if it's in need of life support. Oh well, maybe it’s me. I’ve admired some of Jarmusch’s movies and been unimpressed by others. For me, this one staggered its way onto the negative side of the ledger.