Mindy Kaling and Emma Thompson team in a comedy about women in the world of late-night network TV. 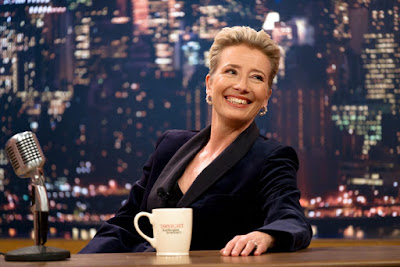 In the new comedy Late Night, Emma Thompson portrays Katherine Newbury, the only woman host of a long-running late-night show that airs on network TV. Icy of temperament and cruel to her staff, Katherine is supposed to be a stand-up comic with a cutting delivery. Jokes aside, she tends to prefer serious guests to refugees from reality TV.

Katherine presides over a stable of male writers whom she believes may be letting her down. Her once-popular show is on its way to becoming an afterthought. The station's new head (Amy Ryan) already has made arrangements to replace Katherine with a comic (Ike Barinholtz) who happily wallows in the sort of crude material Katherine abhors.

What to do? The screenplay by Mindy Kaling (of TV's The Office and The Mindy Project) brings fresh blood to the rescue. Kaling portrays Molly Patel, a woman who works in a chemical plant but secretly dreams of becoming a comedy writer.

As part of a desperate attempt to diversify her staff, Katherine insists on hiring a female. Molly fills the bill and, even better, qualifies as a low-expectation hire. Molly's male counterparts believe the inexperienced wannabe will vanish quickly.

Of course, Molly won't be so easily dispatched. Turns out she has fresh ideas and isn't afraid to talk about them at writers' meetings over which Katherine presides without calling any of the contributors by name. She assigns them numbers.

Two strains of assertion drive the story. Can the old dog (Katherine) learn a few new tricks and can the newbie (Molly) become a legitimate presence in helping to engineer the transformation?

Underlying both of these questions is another imperative, the one that says, it's best to be yourself and allow the chips to fall where they may.

Katherine, who's supposed to be too smart for an era of dumbed-down TV, also qualifies as too unpleasant to win many off-camera fans. Her devoted and nearly invisible husband (John Lithgow) remains a loyal supporter. Thompson's performance doesn’t skimp on scorn for Katherine’s supposed inferiors while also suggesting that she knows her fastball has lost some of its zing.

Among the writers, Reid Scott (Veep), Max Casella (The Marvelous Mrs. Maisel) and Hugh Dancy (of TV's Hannibal) make some impact. Dennis O'Hare portrays the show's besieged producer, a fellow with the unenviable job of soothing Katherine's ego and keeping the staff from withering under the glare of her imperious gaze.

All of this might have worked well enough save for a couple of problems -- not the least of which is that Thompson, a brilliant comic actress, never seems like someone who'd find her place on a stand-up stage. It's a crucial distinction: Comic acting and stand-up don't draw on the same skills.

Laughs are a matter of taste, I suppose. For me, Late Night provided intermittent amusement until it reaches its predictably affirming conclusion. So, another movie in which promise exceeds fulfillment? For me, yes.