Toys are us -- or at least pretty human 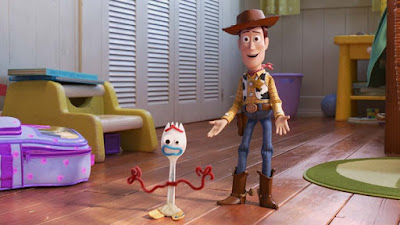 What’s an aging toy to do?

That question hovers over Toy Story 4, giving the movie a strange relevance that goes along with the comfort and amusement we associate with toys.

In this edition, Woody -- the familiar cowboy toy voiced by Tom Hanks -- faces a struggle between loyalty and personal fulfillment. Bo Peep (voice by Annie Pots) already has struck out on her own. She’s given up on the idea of belonging to a child. Long separated from the lamp they once called home, Bo and her sheep roam the country as free ... geez ... I almost said beings.

After a brief prologue, director Josh Cooley plunges into a story that takes some odd turns. Bonnie, Woody’s latest “owner,” has been ignoring the cowboy, but Woody continues in his loyalty, even sneaking into Bonnie’s backpack to help her deal with her terrifying first day at school.

During that fateful day, Bonnie makes a toy out of a spork and pipe cleaners. Named Forky and having been granted toy status by virtue of Bonnie’s affection, the newbie springs to life.

Initially, Forky has trouble giving up his previous identity as a disposable piece of trash. Left to his own devices, Forky instinctively leaps into the nearest wastebasket, forcing Woody to rescue him -- not because he cares that much about Forky but because he knows Bonnie will be distraught if she loses a toy she made.

When Bonnie’s family takes an RV trip, the story takes an even weirder turn. Woody and Forky wind up in an antique store where they’re terrorized by four ventriloquist dummies and their leader, a doll called Gaby Gaby (Christina Hendricks). An old-fashioned girl doll with eyelids that drop into a blink, Gabby wants to steal Woody’s voice box to enhance her desirability. If a kid can pull her string and hear Gaby talk — routine doll babble that has nothing to do with her "real" vocal skills — perhaps she’ll be able to fulfill her destiny and find her very own human.

And, no, I can’t believe I’m writing about the motivations of toys, but such is the life of movie critics and children.

The dummies give Toy Story 4 a weird horror-movie tilt — at least for a few minutes. I half wish Disney had gone all the way and really taken Toy Story 4 off the rails, but that, of course, would have been commercial suicide.

Instead, the Pixar team balances the sentimental, the slightly scary and the blatantly emotional in a package that marks a definite improvement of the last installment.

As with all sequels, this one has been accessorized with a few new features, notably two furry toys. Jordan Peele gives voice to Bunny and Keegan-Michael Key does voice work for Ducky. Even better, Keanu Reeves provides the voice for Duke Caboom, a failure-prone motorcycle-riding daredevil. It's one of Reeves’ best performances.

Old standby Buzz Lightyear (Tim Allen) tags along for the ride, taking a bit of back seat to the other characters. But even Buzz receives a showcase moment.

The always reliable Pixar animation can seem a bit creepy — plastic faces that never fully come to life. But what the heck, these are toys. Besides, humans have relatively little to do with this edition; they’re around to give the toys a sense of purpose.

If an adult friend (sans kids) asked me whether he or she should race out to see Toy Story 4, I’d probably shrug. If you must. But parents who see the movie with their kids won’t be bored and Disney always gives enough cartoonish bounce to its endeavors to keep youngsters happy — even if they’re not tuned into what some critics are calling an “existential” edition of Toy Story.

The end credits will help you decide whether Bo Peep and Woody have a future. This may not be as pressing a question as whether artificial intelligence will deprive you of employment or whether climate change will torment your progeny in ways you hardly can imagine, but for a couple of hours, Disney and its fine voice cast help you get caught up in it.

A footnote: I wonder whether kids will realize that they can make Forky at home and without jumping onto any merchandising bandwagon. This could start a massive new trend that cripples sales of movie-related toys: Kids actually making things themselves. What a concept.