Watching inhabitants of the publishing world

Non-Fiction examines life within a narrow yet revealing frame. 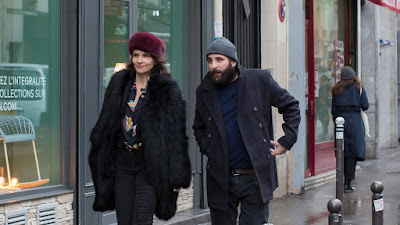 About a quarter of the way through director Olivier Assayas‘s Non-Fiction, my wife turned to me and whispered, "I can't stand these people." Her abhorrence seemed entirely justified.

Assayas's dive into the besieged world of book publishing -- complete with copious conversations about the digital onslaught that threatens the literary soul -- focuses on narcissistic intellectuals who have affairs as casually as the rest of us might have lunch and who seem to hide behind veils of self-assured posturing. Among this group, it's not easy to separate conviction from self-interest.

There's an undeniable sense of life in Non-Fiction along with fine performances in a story that begins when the editor of a publishing house (Guillaume Canet) rejects the work of one of his authors (Vincent Macaigne).

Assayas then opens the world he wishes to explore, allowing his characters to become more stressed and more revealed.

Canet's Alain is married to an actress (Juliette Binoche) who has been working in a popular television crime series. Macaigne's Leonard's wife, Valerie (Nora Hamzawi), has committed herself to politics, working for a left-leaning politician. She responds cruelly when Leonard sinks into depression.

She approaches life with staunch practicality that leaves little room for compassion toward those around her and also differentiates her from a crowd that's likely to spend hours talking about e-books, the impact of digital media, the way we perceive the world, and whether blogs are worthy of attention from literary-minded readers.

Leonard's so-called "auto-fiction" comes under fire. Does it exploit the lives of those with whom he associates, particularly the women with whom he's had affairs? And, yes, bed-hopping may have something to do with various decisions that are made. We begin to suspect pettiness lies beneath what sometimes are expressed as matters of principle.

I couldn't begin to tell you whether Assayas cares a fig about the way the digital world seems to be gobbling up everything, changing long-standing practices and assumptions. And I'm not entirely sure these verbally dexterous characters are doing anything more than engaging in a rarefied form of shop talk about the business they happen to inhabit.

Even-keeled Alain has an affair with a young woman (Christa Theret) who has been hired to help shove his company into the digital age and who seems to be a model for some new kind of human being. She’s a pillar of technical pragmatism.

Binoche's character worries that her TV work amounts to a betrayal of her artistry. Leonard doesn't seem entirely convinced of his talent, admitting that he can't write without pillaging his own life and the lives of those who happened to wander into it.

Only Hamzawi's Valeria seems to have her feet on the ground, but you wouldn't want to take her as a role model either.

So what's the takeaway from all this? I'd say the movie has something to do with exposing the narrowness of preoccupied lives. It's not the digital world that threatens Assayas's characters; it's their insistence on using their considerable intellectual skills to create the illusion that they might actually know what they're doing.