A few words with Fisher Stevens 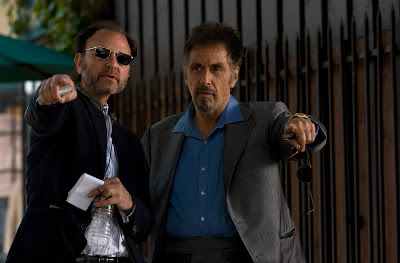 Talk about a dream cast. To make Stand Up Guys, Fisher Stevens was able to cast Al Pacino, Christopher Walken and Alan Arkin in principal roles. Each of them plays an aging gangster at a point in life when mortality no longer seems like a distant threat. In an on-line chat with critics, the 49-year-old Stevens, who has acted in more than 85 projects and who has directed three features, talked about his movie, which is just now opening around the country.

Q: Were there any differences in how you approached the job of directing Pacino and Walken??
Stevens: Before we started shooting, I knew Al much better than Chris. I spent a bit more time going over the script at the beginning with him, so I felt more at ease directing Al at first. With Chris, I had to feel my way around at the beginning. But they both welcomed direction. Sometimes they would disagree with me, but ultimately, they would always try one take the way I wanted it.

Q: How difficult was it for you to get Walken and Pacino to agree to the roles each plays? Pacino's Val, a guy who just has been released from jail, is a bit more of a loose cannon than Walken's Doc, an aging gangster who seems to have done a better job coming to grips with his age.

Stevens: When I started the movie, Al and Chris told me that they had done a reading a few years earlier of a different version of the script. Al played Doc, Chris Played Val. When I called Chris to say I was directing the film, he expressed interest in playing Doc. He said that as he gets older, he enjoys playing grandfathers.
I went in a round-about way to try and get someone to play opposite Chris, not going to my friend Al Pacino, because I was told he wasn’t interested. I kept striking out until my phone rang one day. It was Al calling me after he had seen a Woody Allen documentary I had executive produced. He asked me to work on a documentary with him. I said, 'No, I want you to read Stand Up Guys again and consider being in it with me directing.' There was a long pause, and Al said, 'You’re directing?' I said, 'Yeah.' He read the screenplay, and said, 'Of course.' Four weeks later we were in pre-production.

Q: How did you decide on who would play Hirsch, the former crony and getaway driver who Doc and Val rescue from an old-age home?
Fisher: The first person I thought of for Hirsch was Alan Arkin. I had worked with him in the film Four Days in September 20 years ago. I guess because Chris and Al were already attached to the film, it peaked Arkin’s interest. Thank God he said yes. It was like a dream come true.

Q: Stand Up Guys is set in the present, but has the feel of an older film. What, if any, films were primary inspirations for Stand Up Guys?
Fisher: Many films from the 1970s including Dog Day Afternoon, Five Easy Pieces, Straight Time, and The Dirty Dozen. I loved the films of the '70s because they were about characters and not so much about big plot points and big set pieces. I made sure there were no cell phones, no computers, nothing very modern in Stand Up Guys except for the car that Pacino steals. Most of the clothes were vintage. The colors were muted. It was like time had forgotten this town and these people.

Q. Can you say a bit more about your approach to material that's both comic and serious?
Fisher: It was important to ground this entire script in reality. That was the only way for it to work. We rehearsed and had long discussions about keeping everything real, even when it comes to hyper-blown situations. Fortunately, I had the greatest actors in the world to work with, and they only know how to do things real. When it felt false, we did another take...It was incredible fun. Sometimes I would get lost just watching them act, and forget I was directing. It was also a lot of work, but I would gladly do it again.

Posted by Robert Denerstein at 10:52 AM

Thanks for sharing such a great blog..Keep posting..Very informative post.