A thriller that may be OK for January, but isn't as good as its cast.. 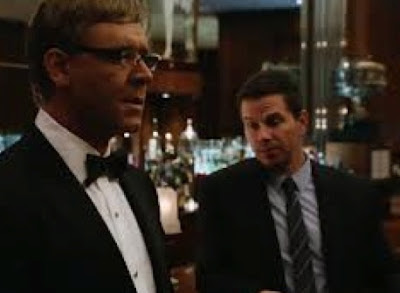 A justice-seeking cop takes matters into this own hands. A long-time New York City mayor works the system and might on occasion dip into his hand into vats of corruption. An opposition candidate says he wants to bring the fresh air of reform to the city. These are some of the ingredients in Broken City, a thriller steeped in so much urban malfeasance that it feels like the recurrence of a chronic disease. To moviegoers, the symptoms are drearily familiar.

Starring Mark Wahlberg as a former NYPD lieutenant who has taken up work as a private investigator, the movie's strong supporting cast includes Russell Crowe (as the reigning New York City mayor); Catherine Zeta-Jones (as his wife); Jeffrey Wright (as New York's police commissioner) and Barry Pepper (as a reform candidate who's opposing what appears to be the mayor's umpteenth run for office).

In this outing, director Allen Hughes (Menace II Society, Dead Presidents and The Book of Eli) makes his first solo effort, operating without his brother, Albert, with whom he usually collaborates. Like the screenplay by Brian Tucker, Hughes's direction isn't always vice-tight, and although his movie qualifies as decent January fare, its characters and observations seem to have fallen off the library shelf marked "Urban Rot."

Wahlberg is the kind of actor who can occupy the center of a movie with an ordinary-guy vibe, and he does that here. His Billy Taggert is a hot-headed ex-cop and struggling alcoholic who left the police force after being acquitted of murder. A court ruled that Billy acted in self-defense, but an unexpected development threatened to cloud the waters, and Billy was forced to take one for the team.

Seven years after leaving the force, Billy has been reduced to taking surreptitious photos of philandering spouses, and trying to collect back fees from deadbeat clients.

Billy returns to mainstream action when Crowe's Mayor Hostetler hires him for a hush-hush job. Billy's told the city's First Lady is having an affair. The mayor wants to know who's poaching on his territory -- and that's only the beginning of what turns into a festival of back-stabbing.

A plump-looking, pumpkin-faced Crowe doesn't quite conquer a New York accent, but he tries to jam as much color as possible into an off-the-rack urban character. Zeta-Jones brings cool beauty and intelligence to her role; and Wright, always good for an off-balance performance, makes the police commissioner difficult to pin down.

The plot can feel as dense as New York traffic, and at one, point, Hughes even tries his hand at a New York City car chase. Let's just say it doesn't measure up to the standard set by William Friedkin in the French Connection.

If you sit through the end credits, you'll notice that some of the movie was filmed in New Orleans. Whether this had anything to do with a nagging sense that something's missing from this New York City-based drama is anybody's guess. Broken City tries hard to be gritty and savvy, but we've seen enough movies to already know what it spends considerable energy discovering.


Posted by Robert Denerstein at 4:15 PM