'The Impossible' hits with real force

Naomi Watts takes a beating in a harrowing movie about a real-life disaster.. 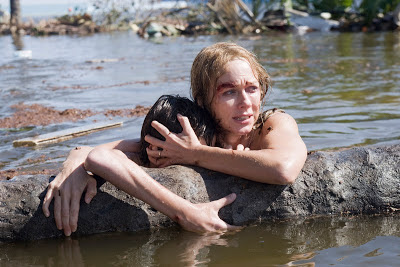 For 25 or so early-picture minutes, The Impossible is as compelling as moviemaking gets. Credit Spanish director Juan Antonio Bayona with presenting a full-blown and entirely harrowing recreation of the Indian Ocean tsunami that struck Thailand on the day after Christmas, 2004.

The movie begins with a title card telling us that it's going to focus on the tsunami -- which claimed more than 200,000 lives throughout the Asian region -- so even its placid opening scenes keep us on edge. And in case we weren't already uneasy, Bayona -- who directed the horror movie The Orphanage -- provides a few ominous forebodings of what's to come as a family flies to Thailand for a Christmas vacation.

Using CGI and a variety of other techniques, Bayona has made the most convincing depiction of a natural catastrophe that I can recall seeing on screen. (If you want to know more about how Bayona accomplished this impressive feat, you can read an article about it in the New York Times. For my purposes, I'd simply say that you'll feel the full force of the tsunami, and you may have difficulty watching the havoc it wreaks.

Bayona's movie is based on the true story of a vacationing family that was stuck in the tsunami. That Spanish family has been converted into an English family for the movie with Naomi Watts playing the mother and Ewan McGregor, the father. They're Maria and Henry, parents of three sons (Tom Holland, Samuel Joslin and Oaklee Pendergast).

The heart of the movie belongs to Watts and Holland. Watts portrays a physician who set aside her career to tend to her children. As the movie unfolds, she takes a major beating, and whoever did Watts's make-up deserves credit for making her look increasingly like someone with a foot on death's doorstep.

Separated from the rest of the family by the tsunami, Holland and Watts wind up together. Their ordeal is ... well ... just that, an ordeal, and it moves from devastated Thai landscapes to a makeshift hospital, where suffering has reached unbearable proportions and injuries are shown with a graphic realism that's not for the squeamish.

Watts gives a strong performance as an injured woman desperately trying to hang onto life, exhibiting strength of spirit even when lying in a hospital bed. Holland keeps pace as the oldest son, a kid who's forced to deal with a full plate of woe and who rises to the challenge.

Bayona does his best to suggest the scope of physical and human destruction that surrounds a family that was dealt a stunning blow by nature and then left to deal with the rampant confusion that followed.

Having said all that, I'm of two minds about The Impossible, which includes one sequence that seems too obviously manipulative for a film that's dealing so much death. I can't describe it without adding a spoiler, but you'll know it when you see it because you'll probably be rolling your eyes.

I also wondered whether a movie such as The Impossible isn't trafficking in a kind of weird and troubling voyeurism by flooding us with so much powerfully portrayed pain and suffering.

Then there's the other of those two minds, the mind that felt emotionally wrung out by The Impossible, which brought me as a close to an epic natural disaster as I ever want to get -- and which told me a truly remarkable story.