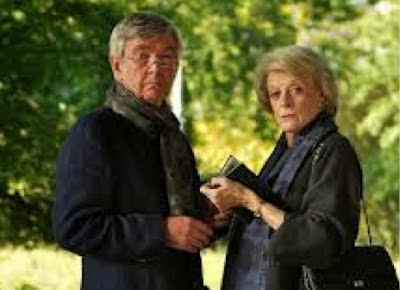 Quartet is noteworthy for being Dustin Hoffman's directorial debut. Little else about the movie deserves pressing into one's book of cinema memories. Treating its aging characters as colorfully humorous, Quartet puts its mountain of cliches into the hands of a collection of British actors who earn respect simply by showing up. The movie takes place in an estate-like home for aging musicians as they prepare for a fund-raising gala that (yes) is needed to save the institution from bankruptcy. Faint ripples of drama emerge when Maggie Smith's Jean Horton shows up, much to the consternation of her ex-husband Reginald Paget (Tom Courtenay), another of the home's residents. Reginald never has forgiven Jean for a long-ago dalliance. Moments of sentiment bump up against the movie's comic core. The screenplay by Ronald Harwood, who adapted his own play, specializes in broadly drawn characters. Michael Gambon is the imperious impresario who's trying to pull the gala together; Pauline Collins plays the addled, memory-challenged Cissy; and Billy Connolly portrays the obligatory dirty old man. It's difficult to argue with the abilities of a cast of established veterans. But the movie's poignant moments veer toward the maudlin, and there's not a lot of drama in wondering whether Smith and Courtenay will reach some sort of rapprochement or whether four singers can be put together to perform a quartet from Rigoletto. Smith, in fine form, plays a reluctant diva; Jean must be persuaded to participate in the quartet. For all the fuss about the gala, it looks far too modest to support the estate and grounds where most of the movie takes place. A scene in which Courtenay's character lectures to a group of rap-oriented youngsters about the glories of opera seems neutered of any bite. And a movie about serious music surely could have done better than Dario Marianelli's warm bath of a score. Oh well, perhaps it's fitting accompaniment for such a middle-brow massage of a movie.