A great cast can't salvage and over-stylized look at LA crime in the late 1940s. 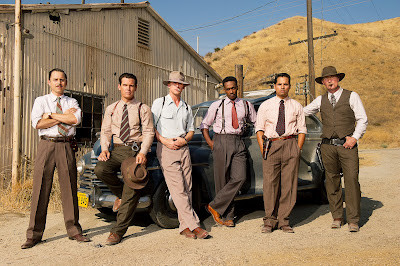 Sitting through Gangster Squad is a bit like watching a bad Brian DePalma movie, maybe a low-grade version of The Untouchables. I felt cheated. If I'm going to watch bad De Palma, I'd prefer that it be directed by De Palma rather than by Ruben Fleischer , best known for 30 Minutes or Less and Zombieland.

Perhaps because he's dealing with so many familiar elements, Fleischer relies heavily on style to spiff up the story of a small squad of LA cops who use rogue methods to take down famed gangster Mickey Cohen. Gangster Squad, we're told at the outset, was inspired by a true story, but the movie's shamelessly enhanced dramatic oomph made me wonder whether inspiration hadn't trumped accuracy.

According to the movie, Cohen attained so much power in post-war LA that he threatened to take control of the city, a feat he accomplished by showering the police and select judges with equal amounts of bribery and threat. In defiance of the Chicago mob, Cohen also attempted to corner the market on all West Coast bookmaking. He might have succeeded, too, had it not been for the Gangster Squad, a group of LA cops who worked deep undercover, never receiving credit for their efforts.

In telling what could have been a rewardingly sleazy LA tale, Fleischer and screenwriter Will Beall put a lot of second-rate dialog in the mouths of many thinly drawn characters. The movie is so pulpy, the Tommy Gun blasts practically scream out for "blam! blam!" exclamation points.

If you've read anything about Gangster Squad, you already know that the movie was scheduled for earlier release, but was delayed because it once contained a shooting scene at the famed Grauman's Chinese Theatre. Not surprisingly, such a scene (now gone) seemed in poor taste after the Aurora multiplex shootings, although I wonder if it would have been in any better taste had that execrable bit of real-life violence never occurred.

Offensive levels of violence aside, Gangster Squad represents a significantly wasted opportunity, mostly because Fleischer has assembled an impressive cast.

That's a strong enough roster to make the movie's by-the-numbers script even more distressing. It's like asking a professional all-star team to play pick-up games in the park.

Emma Stone joins this heat-packing boys' club as Cohen's girlfriend, a woman who falls for Gosling's character, a jaded cop who doesn't sign up for the Gangster Squad until he sees an innocent shoe shine boy gunned down in the streets. Hey, even the most cynical cop has his standards.

The Gangster Squad is formed when the LA police chief (a bearish Nick Nolte) decides that the only way to topple Cohen is to fight fire with fire, an idea as unoriginal as the way I've just expressed it. Nolte's William Parker encourages his squad of renegades to step outside the law and wreak havoc on a Cohen empire built on profits from prostitution and gambling. Essentially, this means that they smash a lot of furniture, kick in doors and stuff like that. When they're about to shoot a bunch of bad guys, they say things such as "Light 'em up."

Fleischer seems to have encouraged over-the-top acting, particularly from Penn, who turns in one of his least interesting performances as the rapacious, sadistic Cohen. Fully embracing Cohen's darkest impulses, Penn makes the gangster seem so repulsive, you wonder why his own men don't bump him off.

There's no skimping on violence with the number of bullets almost matching the number of cliches in a script that scrambles film noir and western conceits while making a feeble attempt to raise an embarrassingly obvious moral question: Is it OK for cops to turn to savagery in pursuit of a good cause? Adjustment issues faced by World War II vets -- notably Brolin and Gosling's characters -- receive short, simplistic shrift.

Little about the dialog is subtle or nuanced, so the actors are forced to work awfully close to the surface. Brolin rages; Gosling does cool; Ribisi (as the 1940's-style techno geek) raises issues of conscience; Patrick acts as if he's just wandered in from the set of a B-western; Mackie remains calm under fire; and Pena is stuck in the tag-along role.

Fleischer may have wanted to make a movie in which everything comes across as pure and unadulterated -- a clash of boldly drawn big-screen archetypes. It mostly doesn't work, and Gangster Squad earns its stripes as the year's first disappointment. I suspect it won't be the last.