A look at an Oakland ER

A documentary takes us inside the emergency room of a public hospital -- and there's not a single George Clooney in sight. 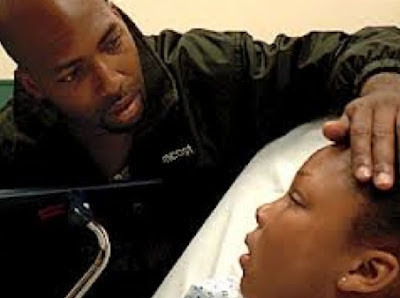 The doctors are thorough, compassionate and composed. The nursing assistant who manages the traffic-flow is good-humored, likable and patient. Understandably, the patients -- many of whom wait hours to be seen -- are often frustrated.

We're talking about the emergency room in Oakland's Highland Hospital, which is where director Peter Nicks spent five months in 2010 shooting his emotionally devastating and deeply revealing documentary, The Waiting Room.

Nicks introduces us to the population of the ER, focusing on several patients -- a long-haired young man with a tumor that needs removing, a frightened girl with strep throat and a low-wage carpet installer with back problems that may require surgery. All of them are being buffeted by economic, as well as health issues.

The Waiting Room, which creates the illusion of a long day in the ER, makes a strong case for single-payer medical insurance. That's not Nicks's conclusion; it's mine. Without adornment or editorializing, Nicks shows us -- at ground zero level -- what it's like to seek care in the over-crowded emergency room of a public hospital.

Nicks also introduces us to cross-section of Alameda County residents, most of whom are in the ER because they have no other options. They all need help, but the movie clearly demonstrates that ERs shouldn't be functioning as the only points of care for people who are uninsured, tied to minimum-wage jobs, unemployed and otherwise stressed.

Nicks captures a couple of dramatic, trauma cases (the film includes one death), but most of the people who visit Highland probably would be happy to be treated elsewhere. And although the physicians work hard to treat those in need, they know that ERs are ill-suited for long-term or follow-up care. They're designed to deal with crisis -- not to provide on-going health coverage.

Meticulous and non-judgmental, The Waiting Room accomplishes at least two things: It gives us a real-life slice of ER medicine with all its pain, fear, triumphs, tedium and frustration, and makes real the struggle that many face as they fight to stay healthy.

The movie leaves us wondering whether the situation will change with The Affordable Care Act. An expansion of Medicare should help, but if doctors decline to treat Medicare patients or if there are too few doctors to meet growing demand, it's possible that burden on ERs will not be lifted, and for many, scenes like those at Highland Hospital will remain a staple of daily life.


Posted by Robert Denerstein at 10:33 AM