In these days, when fluffy romantic comedies can swell to two hours and 10 minutes, it has become increasingly clear that Hollywood has lost much of its interest in concision, never mind brevity. An essentially simple revenge saga such as Django Unchained rattles on for an indulgent 165 minutes, to take only one example. And let's not even talk about Lincoln's 150 minutes or Les Miserables's 158.

Lengthy movies notwithstanding, it's still possible to remember how much can be accomplished in a very short time. Witness the Oscar-nominated short films (live action and animated), which just now are being released for public view. Away from the film festival art ghetto, shorts finally become a main attraction, five films in each category.

Although 10 films (with the documentary shorts to follow next at the Sie FilmCenter next week) can't possibly do justice to all those who made short films in a given year, they at least can serve as standard bearers for moviemaking that stresses both economy and creativity.

I won't comment on each of the films, but will try to provide a sense of what you'll find when the live-action shorts and animated films (shown in separate programs requiring separate admissions) bow this week, in Denver at Landmark's Mayan. The animated films feature four U.S.-originated entries, and one from Great Britain. These shorts range in length from a succinct two minutes (Fresh Guacamole) to a leisurely 16 (Adam and Dog). Other Oscar-nominated animated films are the delightfully metaphorical Head Over Heels, the whimsical Paperman and the mildly satirical Maggie Simpson in The Longest Day Care.

The two most serious animated shorts are the beautifully rendered Adam and Dog, about the development of the long-standing relationship between humans and dogs, and Head Over Heels, which deals with a marriage in which a husband and wife occupy two different worlds in the same house: he, on the floor, and she, upside down on the ceiling.

I'm glad I don't have to vote in this category. If I did, I'd probably pick Head Over Heels as the most accomplished, witty and resonant, although Paperman , made in black-and-white, has many of the same qualities. But the two films I most enjoyed were the playful Fresh Guacamole, about the ways in which inanimate objects are transformed into (you guessed it) guacamole, and The Longest Daycare, a sweet but slightly mordant look at Maggie Simpson's experiences in a day care center where the gifted children are separated from the ordinary kids. 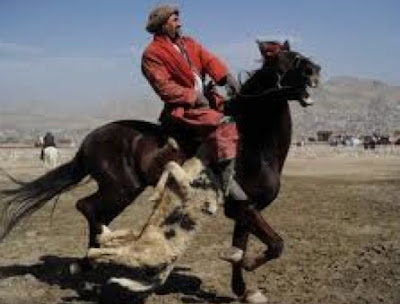 The live action shorts range from 18- to 28-minutes in length, and include work from Canada and the U.S., as well as co-productions from Belgium and France and South Africa and Afghanistan.

All the live-action shorts are quite accomplished with two films (at least in my judgment) vying for front-runner status as far as Oscar voting is concerned: Buzkashi Boys and Asad.

In Buzkashi Boys, the son of an Afghan blacksmith learns about the price of dreaming. Buzkashi, for those who don't know, is the bizarre Afghan sport played on horseback by riders who must carry a dead goat into a small circle while opposing riders try to stop them.

In Asad, a Somali boy copes with a war-torn environment as he's exposed to the bravado of Somali pirates and the simple virtues of an elderly fisherman.

The other three films are: Henry, about an aging musician suffering from dementia; Death of a Shadow, the story of a WWI soldier stuck in a limbo between life and death; and Curfew, a seriocomic look at a suicidal heroin addict who's called upon by his desperate sister to babysit for his niece.

You can't really go too far wrong with any of these films, which -- in sum -- serve as welcome fresheners for the tired cinematic palate.


Posted by Robert Denerstein at 11:10 AM