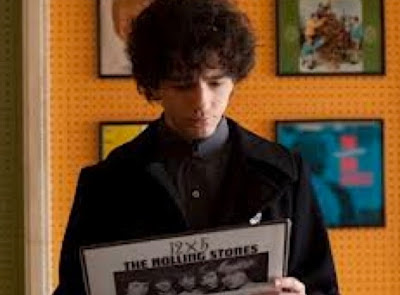 Writer/director David Chase -- the estimable and obviously talented creator of HBO's The Sopranos -- returns to his native New Jersey to tell the story of a group of young men who form (what else?) a rock band.

Looking back on the movie, I'm not sure whether it's more accurate to classify Chase's Not Fade Away as a movie or as an illustrated sound track.

Chase may have wanted to remind us that for every E-Street Band -- Bruce Springsteen's legendary Jersey group -- hundreds of talented wannabes were destined to fade into obscurity. He has hold of a strong idea, but doesn't find quite enough dramatic focus to make it click.

Set during the 1960s, an episodic story centers on Doug (John Magaro), a young suburban drummer who joins a band. Doug hits his stride at a party when he unleashes his version of Time Is on My Side. Doug also becomes involved in a romance with a girl named Grace (Bella Heathcote), but his jealousy and judgments eventually cause the relationship to falter.

The band experiences ups and downs as Chase loads the sound track with music from the Kinks, Bob Dylan, Van Morrison, Bo Diddley, the Beatles and more. (Chase presumably received an assist in the music department from E Street Band veteran and Sopranos regular Steven Van Zandt, who served as the movie's executive producer.)

A narration provided by Doug's younger sister (Meg Guzulescu) may have been intended to hold things together. But the movie remains a loosely assembled collection of scenes and ideas that never coheres into much of anything, a sketchbook of the '60s.

Let me add a quick p.s.: Although I'm not sure what it had to do with anything, I loved the movie's final shot, which takes place after Doug and Grace have traveled to Los Angeles.