A comic hones his stand-up

A MONOLOGUE BECOMES A MOVIE 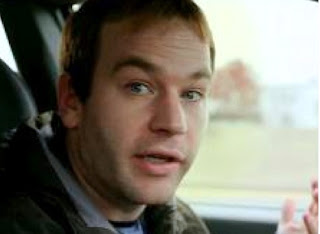 If you have any desire to try your hand at stand-up comedy, Sleepwalk with Me could give you major second thoughts. Based on the experiences of comic Mike Birbiglia, the movie tells the story of how a comic named Matt Pandamiglio (played by Birbiglia) hones his chops at a variety of low-rent locations.

Birbiglia, who shares directing credits with Seth Barish, narrates this story of comic aspiration, adapted from one-man show he performed in 2008. Although I didn't find the stand-up routines all that funny, the comic's take on his relationship with Abby (Lauren Ambrose), his live-in girlfriend, is well-observed.

Matt and Abby have been together for eight years. She's ready to marry. He's not. Enough said.

About the title? It turns out that Matt is a sleepwalker who acts out the wild scenarios of his dreams while still asleep, a problem that gives the movie its bizarre climax.

Matt's march toward success begins when he receives a bit of advice from comic Marc Maron, who tells him he'd do well to personalize his act. Maron's suggestion stems from an off-hand remark made by Matt, who says he doesn't want to get married until he's sure that nothing else good can happen in his life. Use that, says Maron.

Birbiglia winds up being a likable enough presence to keep us involved, and Ambrose -- familiar from TV's Six Feet Under -- shines as a woman who ignores more than a few signals about Matt's intentions.

The movie's script was written by Birbiglia, his brother Joe, Ira Glass -- of PBS's This American Life -- and director Barish. The screenplay has Matt talking directly to the camera when he needs to elicit sympathy, a gimmick that probably shouldn't work, but does.

A COMEDY THAT'S NOT TO BE BELIEVED 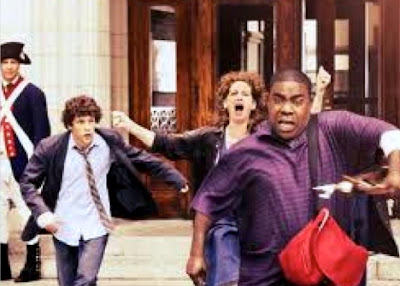 Neither Jesse Eisenberg nor Melissa Leo can save Why Stop This?, a fatally mixed-up comedy about a brilliant high school pianist who's trying to get his drug-addicted mother into rehab. An early picture contrivance has Eisenberg's Eli and Leo's Penny searching for cocaine so that her urine will test "dirty." The uninsured Penny, who has been clean for three days, is told that the only way she'll qualify for treatment is to fail a urine test. Mother and son contact Sprinkles (Tracy Morgan) and his partner Black (Isiah Whitlock Jr.), drug dealers who, alas, are in need of re-stocking. All four set out to score drugs from a bigger dealer (Paul Calderone). Eli, who on this very day is supposed to audition for a scholarship to a prestigious music school, wants his mother to get straight so that she can take care of his younger half-sister (Emma Rayne Lyle) when he leaves home. Eisenberg, who turns 29 in October, is too old to be playing a high echooler, but he manages a few laughs in a comedy built around escalating desperation. Morgan fares better in the comedy department, and Leo looks appropriately bedraggled. But what is this? A coming-of-age comedy? A comedy about the way illegal drug use creates colliding class contacts? Or a half-serious look at the problems caused by a good-hearted but negligent mother? Whatever it is, Why Stop Now? certainly didn't need scenes in which Eli's high school classmates dress up as Revolutionary War re-enactors. Huh?