''The Words:" How about a rewrite?

This melodrama seems to be looking for something more serious than anything it finds. 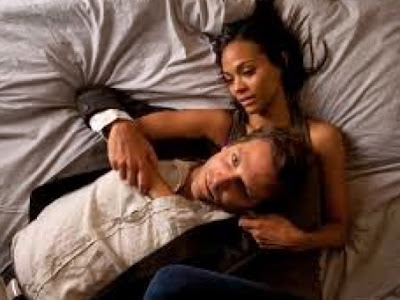 A successful and well-respected author takes the stage for a public reading of his latest novel. Our willingness to accept this supposed literary titan as the real deal depends on what we think of his writing.

So here's the first sentence that Dennis Quaid's Clay Hammond reads: "The old man stood in the rain." Really? That's it? A bit of scrawl that's only a step above "a dark and stormy night?"

Fortunately, the movie quickly leaves Quaid and begins showing us the story his character is reading, an improvement (though a small one) over the writing we've just heard.

Hammond's tale centers on Rory (Bradley Cooper), an aspiring writer who lives in New York City with his girlfriend and soon-to-be-wife (Zoe Saldana). Rory's writing career is going nowhere. His confidence is ebbing. His father (J.K. Simmons) suggests that it might be time to look for a job.

A frustrated Rory eventually does seek employment, landing a low-level position at a literary agency. But Rory still dreams of becoming a literary success, and his self-image is tied to that dream.

As often happens in lesser works of fiction, contrivance -- masquerading as fate -- intervenes.

During a honeymoon trip to Paris, Saldana's Dora buys Rory an old briefcase. Upon returning to the U.S., Rory discovers an unpublished manuscript tucked in one of the briefcases folds. Lo, it's a terrific book about an American GI in post-war France.

Because The Words has been operating with a kind of precise predictability, we immediately know that Rory is going to appropriate the novel, that it will become a major success and that he will have launched an impressive (if fraudulent) career.

To add another layer of complexity, directors Brian Klugman and Lee Sternthal, who also wrote the screenplay, dramatize the story told in the purloined novel. That tale features Ben Barnes as a GI turned writer and Nora Arnezeder as the French woman who steals his heart and with whom his life hits a tragic snare.

But back to the story that Quaid's character is reading.

In that melodramatic tale, the old man who was standing in the rain (a withered-looking, bearded Jeremy Irons) reappears to claim authorship of the book Rory has passed off as his own. Irons's character wants Rory to wrestle with his conscience.

Rather than adding dizzying complexity, the movie's stories-within-stories approach feels entirely routine. It does, however, bring about a few minor realizations. Among them: Cooper should henceforth try to avoid appearing with Irons, who -- even in a silly role -- can't entirely hide his superior acting chops.

The rest of the cast doesn't exactly soar, either. Quaid's face shows plenty of mileage, but he's stuck in slim role in which he's both admired and challenged by a literary groupie (Olivia Wilde). Wilde's character attends Hammond's reading and very obviously is looking for more than bookish inspiration.

It's entirely possible that The Words wants to explore big themes: The tension between life and art and what happens when a young man's ambition is unmatched by his talent, but the movie winds up feeling as thin as the paper on which its multiple novels are printed.

The Words tells many stories. Unfortunately, all of them are mediocre.