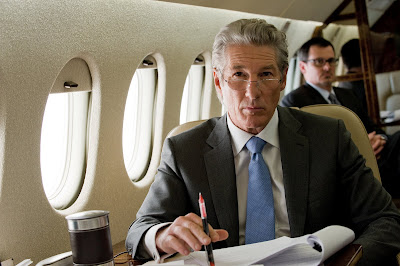 Robert Miller has a lovely wife and two grown children who work for him at his wildly successful hedge fund. As befits a man of great wealth, Miller and his wife give major money to charity, and he's regarded as a Wall Street wizard, a guy who hits way more than he misses.

But Robert -- Richard Gere in a performance that's smart and icy -- may not be anyone's idea of a role model. He has a mistress (Laetitia Casta), and he's in the midst of carrying out a fraud, a $412-million scheme designed to fool auditors who are evaluating his company for a possible merger.

Robert desperately wants the merger to succeed, which means he's walking a financial tightrope. He hopes he can close the deal before he faces exposure and ruin.

Despite the movie's initial appearance, writer/director Nicholas Jarecki isn't necessarily out to make a major statement about financial corruption, something, say, on the order of last year's Margin Call.

First and foremost, Jarekci cranks up a thriller that has Robert trying to cover up another crime, a task that involves him with a young black man (Nate Parker) who owes him a favor and helps carry out the deception.

This part of the movie introduces a determined cop (Tim Roth) who spends most of the movie trying to prove Robert's guilt. If things threaten to get dull, an amusing Roth's around to pose questions that seem to annoy everyone with whom he talks.

Adding a second criminal element to the financial deception has a dual effect: It keeps the movie from bogging down in complex wheeling and dealing (good), but it also prevents Jarecki from making a strong enough statement about a financial system in which unethical and illegal behavior seems to be tolerated -- so long as no one gets caught.

Jarecki has a lot on his plate, but he mostly weaves the movie's many threads into a brisk and coherent thriller that features a variety of strong performances. Among them: Susan Sarandon portrays Robert's wife, a woman who may know more than she lets on. Brit Marling plays the daughter who works for and idolizes her father, and who provides the movie with a character who experiences morally based doubt.

About three-quarters of the way through, I began to wonder how Jarecki would join the movie's many plot lines, and I can't say I found his resolution entirely satisfying, but there's enough crackle, intrigue and pleasure (smart guys trying to outsmart one another) in Arbitrage to keep it percolating nicely.