A comedy with an indie spirit -- and dirty talk.. 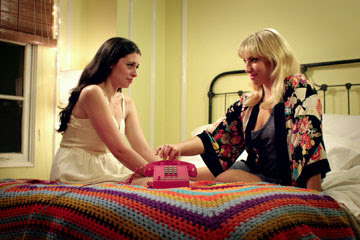 Just about anything can be a source for comedy -- and that includes phone sex, the central gimmick in For a Good Time, Call ..., a movie that tries to celebrate female friendship while taking a giggly approach to its risqué hook.

We quickly learn that Graynor's Katie supports herself with multiple jobs: She's both manicurist and phone sex worker.

After losing her publishing job, Miller's character -- named Lauren -- decides to help Katie make the move from employee of a phone-sex service to owner of her own operation. The two become partners in a story that begins to look like an advertisement for starting a small business -- with dirty talk added for ribald measure.

If you're looking for a movie that in any way explores the moral and psychological impact of being a phone sex worker, you'll have to look elsewhere. Working from a script by Miller and Katie Anne Naylon, director Jamie Travis has nothing much in mind other than turning out a gloss of a comedy that offers the female equivalent of a "bromance." Does it become a "she-mance" when women are involved?

I won't include spoilers, but know that the script revolves around a few twists that are ridiculously improbable and that it also provides the two women with a gay male friend, an obligatory presence in this kind of comedy. As the gay pal responsible for bringing the two women together, Justin Long battles cliche -- and I'm afraid loses.

Few expect realism in a giddy comedy, but the idea that Katie would meet with one of her regular callers (Mark Webber) makes too big a mockery of verisimilitude. And the movie's suggestion that there might be something more than friendship bubbling beneath the surface of Lauren and Katie's relationship seems ill-defined and confusing.

In this odd couple pairing, Miller portrays the organized woman; and Graynor -- who makes the bigger impression -- portrays the free spirit. The actresses work well enough together and whip up a few chuckles, but despite its phone-sex focus, For a Good Time, Call can't let go of convention: Girl meets girl. Girl and girl have a Big Fight. Girl and girl reunite as best buds.