Eastwood scouts for another hit

Trouble With the Curve is low on surprises, but still offers some satisfaction. 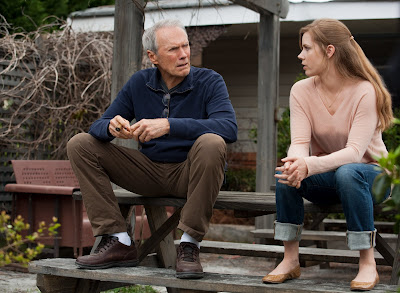 Predictable, a little corny and featuring a familiar performance from Clint Eastwood as a crotchety old baseball scout whose bosses think he may have lost something off his fast ball, Trouble With the Curve can be pleasing in the way of formula movies that pretty much work.

Eastwood portrays Gus, a legendary scout for the Atlanta Braves. Gus has two problems: a statistic-addicted younger man in the organization (Matthew Lillard) doesn't trust his judgment and he's losing his eyesight. Disabilities or no, Gus is stubborn, and he does have one loyal supporter in the Braves organization (John Goodman).

Gus's baseball future seems to hinge on his evaluation of Bo Gentry (Joe Massingill), a high school slugging prospect the Braves are eager to sign.

Randy Brown's screenplay contrives to have Bo's daughter (Amy Adams) join him in North Carolina to help scout Bo. She'll be Gus's eyes. Of course, Gus doesn't want help, and Adams's Mickey (she was named after Mickey Mantle) has problems of her own. On the verge of earning a hard-won partnership, she has to leave her Atlanta-based law firm for a few days to assist Gus.

Eastwood can play a character like Gus in his sleep, but his performance is by no means lazy. He gives the role its due, creating a hard-boiled type who has trouble coming to terms with any sign of vulnerability.

My respect for Adams continues to grow. Watch her in The Master and look at her here. You'll be hard-pressed to tell it's the same actress. I'm not talking about the way she looks, but the way she acts. Her character in The Master has a spine of steel; here she's playing a strong woman, but one who has to hold up her end of a romantic tale.

While helping her father, Mickey meets a young scout (Justin Timberlake) who takes an immediate interest in her.

The story pits Gus's instincts and experience against the statisticians, and you don't need a score card to know who's going to win that battle. This is, after all, a Clint Eastwood movie, and it's unlikely that he's going to suffer an irreparable defeat.

This time out, Eastwood cedes directing chores to Robert Lorenz, who has worked as a second-unit director and producer on a variety of Eastwood productions. Aside from creating a blurry spot in the middle of images that are supposed to represent Gus's fading eyesight, Lorenz does a straightforward job with material that's fairly straightforward.

To the extent that there's subtext, it goes like this: Mickey's an adult, but she and the long-widowed Gus still have issues, which the screenplay doesn't deal with until the end and which hardly qualify as dramatic dynamite.

Trouble with the Curve wraps things up so neatly, it's a bit like watching a player who never gets his uniform dirty. This one's for moviegoers who long for happy endings and who are inclined toward what's commonly known as old-fashioned entertainment.

I'm not always one of those people, but saw no reason to fault a movie that wants to tell its story, maybe moisten a few eyes and move on.