A giddy, girly a cappella movie 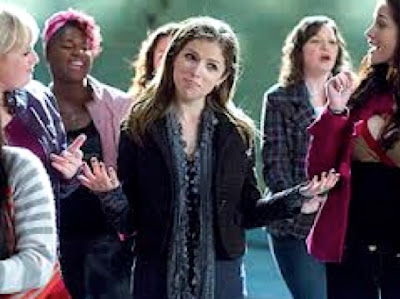 Pitch Perfect is a purposefully silly, sometimes giddy musical about a women's group that enters (and desperately wants to win) a collegiate a cappella competition. As someone far outside the target audience -- whatever that might be -- I'm not inclined to say much about a movie that comes on like the big screen equivalent of a giggle. Anna Kendrick leads a cast of characters that includes a snooty and ultra-annoying blonde (Anna Camp). Another woman calls herself Fat Amy (Rebel Wilson), but might as well refer to herself as the character who most resembles Melissa McCarthy's Megan from Bridesmaids. (Wilson, by the way, appeared in Bridesmaids; she played one of Kristen Wiig's apartment mates.) Wilson's mouthy Amy contrasts with a whispering Asian girl played by Hana Mae Lee. The women's group -- called The Bellas -- squares off against a rival male group known as The Treblemakers. Director Jason Moore piles on the music, not all of which sounded purely a cappella to me. Kendrick's Becca is the nominal main character, a young woman who wants to bring fresh, mixed-tape energy to the Bellas, who seem stuck doing the same numbers again and again. I've liked Kendrick in other movies (Up in the Air and more recently, End of Watch). Here, she's in tune with the movie's loopy spirit, although I can't say I was. What I can say is that every time I see a movie as preposterously energetic as Pitch Perfect, I wonder why I spent my college years hanging around the library. Maybe it's only in movies that the college experience seldom gets anywhere near a book.