A lesson in one-sided argument

Won't Back Down stacks the deck in favor of charter schools. 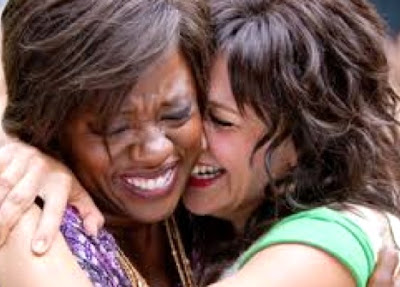 Want to know why your kid can't read?

The answer is simple: It's because teachers receive pensions, have job security and are represented by a union that doesn't give a damn about students.

That's the not-so-underlying message of Won't Back Down, a drama that attempts to applaud the efforts of two women -- a mom and a teacher -- to establish a charter school.

Maggie Gyllenhaal plays Jamie Fitzpatrick, a lower-class Pittsburgh single mother who's trying to get a better education for her dyslexic daughter (Emily Alyn Lind). When Jamie's efforts to work within the system -- attempting to switch classes -- hits a wall, she enlists the help of Nona Alberts (Viola Davis), a teacher whose son also is having learning problems. Nona's on the verge of being beaten down by a system that doesn't demand enough from either teachers or students.

It's not easy to make a balanced film about the process of starting a charter school, and it's quickly apparent that Won't Back Down isn't going to try. The movie's playing with a stacked deck. This one views school boards, educational bureaucracies and unions as impediments to attaining educational nirvana. And woe to the teacher who might give a moment's thought to salary or job security.

Most of the movie focuses on Jamie's persistence. She works two jobs (one as a bartender, the other selling used cars) and begins to devote all her spare time to turning Adams Elementary school into a charter. She also has a brief and mostly pointless flirtation with one of the school's better teachers (Oscar Isaac), a product of Teach for America.

Davis's Nona has struggles of her own. Her son Cody (Dante Brown) has been deemed a slow learner, and she and her husband (Lance Reddick) have hit a bad patch.

The rest of the cast includes Rosie Perez (as one of Nona's fellow teachers); Holly Hunter (as a union official); Ving Rhames (as principal of a charter school); and Bill Nunn (as the principal of Adams Elementary). Hunter portrays the only union-oriented character who expresses a modicum of doubt about her position.

Right from the start director Daniel Barnz , who co-wrote the script with Brin Hill, makes it clear where the movie's sentiments lie. He quickly introduces us to a teacher who seems to be more interested in texting than teaching. Will she give Jamie's daughter a little extra help? Not if it means staying after 3 p.m.

There's no faulting the main performances. Davis is incapable of giving a bad performance, and she's expectedly convincing as a teacher who wants to rekindle the spark that originally drew her to classrooms. Davis's ability to play life-sized characters serves her well here, and she's able to suggest some of Nona's conflict about turning against a few of her colleagues.

Gyllenhaal's performance as a determined woman has lots of spark, but her character has as little appreciation for nuance as the one-sided script.

For a drama about education, Won't Back Down spends too little time in the classroom. In one welcome scene, Nona fires up her class, but for the most part, the classroom becomes a backdrop for a drama that seems more interested in celebrating two strong women than in tackling complex educational issues.

Look, I have no idea about how to fix the nation's public schools, but I'm willing to bet that if all teachers' unions vanished tomorrow, American education wouldn't suddenly turn some magical corner.

Oh well, you can read about educational policy elsewhere. What I'll say here is that Won't Back Down makes an elementary mistake: It puts its reading of the issues ahead of any deeper exploration of character.