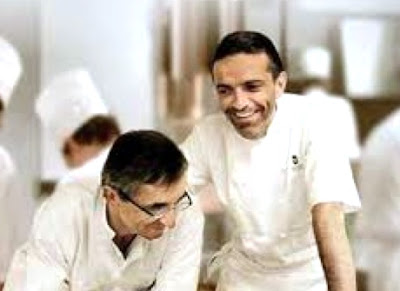 Despite a title that suggests seam-head delights, Paul Lacoste's Step Up to the Plate is about as far from baseball as any movie possibly could get. Lacoste's spare documentary takes us into the minds of two master chefs -- Michel Bras and his son Sebastien. The movie begins at a pivotal moment in both men's lives; Sebastien is about to take the reins of his dad's world famous restaurant in the Aubrac region of France. Sleek and modern in its decor, the restaurant is located in a rural area, and looks pretty much like a destination stop for those for whom food is a passion. You get to watch both Brases at work, and you learn a bit of Bras family history in a movie divided into four seasons, each revolving around certain kinds of vegetables and flowers. During the winter, Michel and Sebastien travel to Japan, where the family has another restaurant. It's fairly clear that Michel Bras isn't going to have an easy time "retiring," and he's never shy about critiquing his son's food. It's also clear that Sebastien -- who works on developing a new dish throughout the movie -- has patience, as well as his own approach to food. Lacoste shows us how various dishes are created from start to finish. The completed dishes have the look of small sculptures, raising -- at least for me -- questions about whether one is supposed to look at it or eat it. But then, I'm the kind of guy who's repelled when he sees the word "drizzled"' on a menu, as in, say, a balsamic drizzle. For serious foodies, though, Step Up to the Plate is a must.

HE SEES ART AS ENTERTAINMENT 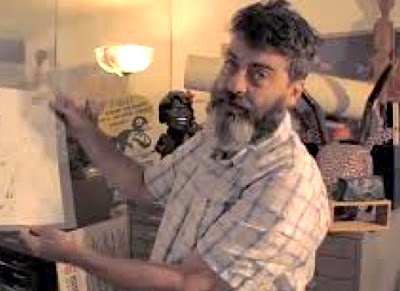 I'd never heard of Wayne White until I saw Neil Berkeley's documentary Beauty is Embarrassing. Maybe I should have. It turns out White -- now a full-time painter and sculptor -- once designed sets and puppets for Pee-wee's Playhouse, the short-lived but much-praised TV show that spawned a couple of movies and became home to a variety of visual artists who found themselves happily ensconced in a creative playpen. The documentary shows how White, who has had a lifelong interest in art, went from being a rebellious southern kid to being a rebellious adult living in Los Angeles. These days, White makes paintings on which he displays (in very large letters) epigrammatic statements, often laced with profanity. After putting himself in a Hollywood pressure cooker making videos for Smashing Pumpkins and working on other high-profile projects, White decided it was time for art to trump commerce. Whatever you think of his White, you'll have a difficult time denying that the man is tremendously versatility. There's also something refreshing about White's insistence that there's nothing wrong with art that entertains. I don't want to put words in White's mouth, but after seeing this documentary, I wondered whether he might not advise all "suffering artists" either to get a grip or try something else.


Posted by Robert Denerstein at 5:00 PM