Wallflowers of the world unite! 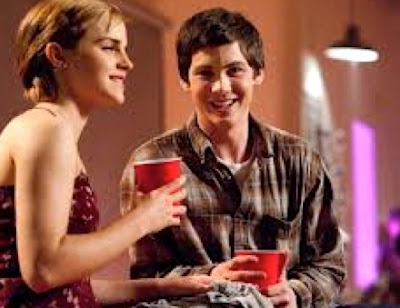 The Perks of Being a Wallflower is a better-than-average teen movie enhanced by elements that might have had difficulty finding their way into a similar movie 20 years ago: a major gay character, incidents of high-school homophobia and teen suicide, to name a few.


In adapting his own young-adult novel for the screen, director Stephen Chbosky tries for a mixture of humor and low-key drama. He succeeds in finding a bit of both in a movie whose success may depend on how much you can identify with a young man who -- at the movie's outset -- is keenly aware that he has 1,385 days until he graduates from his suburban Pittsburgh high school. (Somehow, I don't think counting is likely to make the time go faster.)

Logan Lerman (Percy Jackson & The Olympians) plays Charlie, a high school freshman who finds a much-needed comfort zone with a group of his school's self-proclaimed misfits. Charlie hangs out with Patrick (Ezra Miller), a comfortably gay student, and with Patrick's brash half-sister Sam (Emma Watson of Harry Potter fame). This trio of outsiders form credible bonds of friendship, and Charlie gradually begins to fall for Sam.

Set in the early '90s, Wallflower is a coming-of-age tale punctuated by well-documented problems of adolescence. Charlie, for example, is dealing with the recent suicide of a friend. Patrick has agreed to conceal his affair with a star football player, and the perky, rebellious Sam frets about getting into college. At one point, a precocious fourth member of the group (Mae Whitman) decides to declare herself Charlie's girlfriend.

Those who haven't read Chbosky's book won't know that the story harbors a major secret. Revealed toward the movie's end and hinted at in flashbacks, this secret can feel as if Chbosky is not only trying to be topical, but is doing the thematic equivalent of piling on, adding yet another problem to Wallflower's already large collection.

For me, Miller gives the most notable performance. Not many saw Miller's terrific work in the polarizing We Need to Talk about Kevin, but those who did will recognize that this young actor has range and appeal that far outshines the rest of Wallflower's able cast.

Adults don't play a major role here. Dylan McDermott is cast as Charlie's dad; Kate Walsh plays his mom, and Paul Rudd has a nice turn as a high school English teacher who forms a bond with Charlie, loaning him books.

As teen movies go, Wallflower tends to dwarf its recent competition, but I'd be remiss if I didn't report that I've grown a little weary of big-screen adolescence, and for all its attempts at putting on a fresh face, Perks can't entirely shake a feeling of familiarity. That may not (and probably shouldn't) breed contempt, but it could make you wonder whether American movies ever will graduate from high school.

Email ThisBlogThis!Share to TwitterShare to FacebookShare to Pinterest
Labels: Emma Watson, Ezra Miller, Logan Lerman, Stephen Chbosky, The Perks of Being a Wallflower