Two cops patrol the hood in tense End of Watch 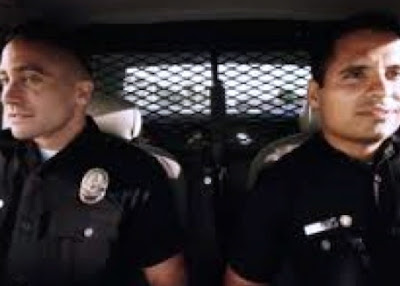 In End of Watch, director Robert Ayer pours on lots of gritty, convincing resolve as he takes us inside the world of two Los Angeles police officers. This mostly episodic look at patrolling partners (Jake Gyllenhaal and Michael Pena) covers a variety of tensely portrayed situations and makes it clear that these young cops are as hooked on the excitement of the streets as the gang bangers they frequently confront.

With his head shaved and eyes glaring, Gyllenhaal plays Brian Taylor, a former Marine who provides the movie with an opening narration that establishes these cops as guys who brook no nonsense when they put on their uniforms. Meet them in a bar, you'll like them. Meet them in an alley, and you may be sorry.

When Taylor and Savala aren't battling crime or helping people in trouble, they're bantering in their black-and-white. They're comfortable trading ethnic jibes, cops who are more loyal to each other than to any outside group.

At one point, Taylor tells Savala that he finally has met a woman with whom he can talk, something he's been craving. Enter Anna Kendrick as Janet, the woman who steals Taylor's heart.

Ayer doesn't spare us graphic violence, and some scenes in End of Watch are super-tense. When the cops enter houses with their guns drawn, they have no idea what they might be facing. At such times, End of Watch works on the gut.

Perhaps for leavening, Ayer introduces us to a bit of off-duty life when Taylor joins Savala at a quinceanera, and there are obligatory scenes at the station house where the men receive their daily assignments. Taylor and Savala also get crosswise with an older cop (David Harbour).

At some point, Ayer needs to introduce a story line. Dropped into all the action is a tale in which Taylor and Savala stumble into the world of Mexican drug cartels and become targets for a hit.

Some of the action is seen from the viewpoint of a mini-documentary that Taylor is filming. There's also footage supposedly taken by gang members. By now the use of feigned amateur video has become as stale as the average car chase. Ayer just as effectively could have employed an edgy, hand-held style without putting video cameras into the hands of his characters.

The looming presence of the drug cartels leads to a bullet-riddled finale marked by a level of violence that goes way over the top. I don't know if it's realistic, but it feels too much like an attempt to further juice the already juiced proceedings, making us wonder whether Ayer, who wrote the script for Training Day, isn't more interested in visceral excitement than authenticity.

Still, End of Watch holds you in its grip. It does a good job convincing us that the cops who work in gang-dominated neighborhoods aren't all that different from soldiers in a war zone. Had the movie gone a step further and done more to remind us that the same goes for most of the residents of those same neighborhoods, End of Watch would have been even better.