A fight for equality or more hype?

Emma Stone and Steve Carell star in Battle of the Sexes, a movie about the much-heralded match between Billie Jean King and Bobby Riggs. 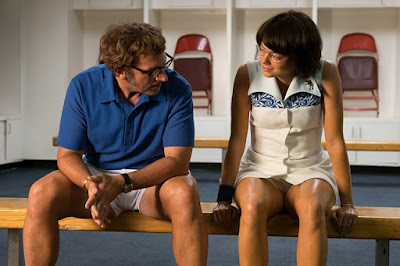 Battle of the Sexes -- the story of the much-hyped 1973 tennis match between Billie Jean King and Bobby Riggs -- isn't exactly a good movie, but it contains interesting work around the fringes.

Bill Pullman, to take one example, steeps his performance in a fully vested sense of privilege as Jack Kramer, a former tennis champ and executive director of the Association of Tennis Professionals. A staunch opponent of the idea that women and men tennis players should earn equal money, Pullman's Kramer stood at the head of the tennis establishment.

Pullman effortlessly imbues every ounce of his performance with an ingrained belief: Women never could equal men on the tennis court. I don't know what the real Kramer was like, but Pullman has been asked to embody the sexist beliefs of a sport that was male-dominated in the 1970s, and he uses the opportunity to deliver a character who has no idea that he's confusing prejudice with fact.

Another fine -- but also minor performance -- in Battle of the Sexes belongs to Elizabeth Shue, who plays Riggs's wife, Priscilla. The scene in which Priscilla dissolves their marriage becomes an exquisite rendering of decisiveness from a woman who understands that Riggs, a compulsive gambler, never will provide the stability she needs. Priscilla tells Riggs the marriage is over with a sense of dignity, authority, and love that's stunning in its compassion.

In line with Shue's performance, the movie treats endangered marriages with a kindness that's quite unusual. Prior to the big match, King's marriage is being tested. She begins a lesbian relationship with her hairdresser. King's husband (Austin Stowell) tries to weather the storm, holding his emotions in check.

It also should be noted that Sarah Silverman has a nice turn as Gladys Heldman, the savvy woman who helped organize and find funding for the women's tour that King and others started.

I know. I haven't said a word about the big match that the movie presents as a pivotal moment in the evolution of the women's movement. I also haven't mentioned that Emma Stone does a credible job as King, although I found myself constantly evaluating her against whatever memories I have of the real person.

With a set of crooked false teeth, Carrel gives an interesting spin to Riggs's life, making him a man whose chauvinism becomes shtick. At the time of the match, Riggs was 55; King was 29. Solely on the basis of his gender, Riggs tried to sell the idea that an aging male tennis star could beat a vibrant young woman with an exceptionally strong game. Riggs, of course, couldn't conquer the difference caused by age, even with a gargantuan supply of vitamin supplements.

You don't get the sense that Riggs totally believed in his chauvinistic rants. He was trying to sell tickets and provide himself with a big payday. For him, the match was an opportunity to put himself into the center ring of a circus -- until, of course, the moment when he realized that he couldn't beat King.

For King the stakes are higher: She wants to prove that women should be treated equally by the tennis authorities. Earlier in the movie, she leads a revolt in which women players withdraw from high-profile tournaments and create their own tour. The issue: equal pay.

Much of the movie (too much, I'd say) is taken up by the budding relationship between King and her hairdresser (Andrea Riseborough). At the time, any hint of gayness would have destroyed King's career, so she was forced to walk a thin line between her emotional needs and her public image.

In part, the movie is hampered by its structure. Directors Valerie Faris and Jonathan Dayton (Little Miss Sunshine) alternate between Riggs and King, a stylistic choice that's equivalent to putting a net between two parts of the narrative and, then, shifting from one side to the other. As a result, Battle of the Sexes can feel as though it's moving sideways instead of gaining forward momentum.

Faris and Dayton do a decent job with the big event, which took place in Houston's Astrodome. The surrounding hoopla almost overwhelmed the actual match, which King won easily.

During the match, the directors show us shots of women rooting for King and middle-aged men looking disconsolate as they realize that their avatar was headed for defeat.

Granted the '70s were a tumultuous time for male/female relations. I know. I was there. But the guys I knew at the time thought the King/Riggs spectacle had less to do with gender barriers than with hype: I didn't take the match seriously enough even to watch the ABC telecast of it.

Working from a script by Simon Beaufoy, the directors must have realized that they had loaded their plates, picking a subject that touches on gay emergence, marital woes, shifting cultural norms, the inflated atmosphere that can surround sports and the desire of some to cash in on all of the above. Faris and Dayton never quite find a tone to encompass the chaos that not only rocked the culture but impacted individual lives.

Put another way, this is one tennis movie that could have used more topspin.