Director Todd Haynes takes on a serious structural challenge and sometimes meets it. 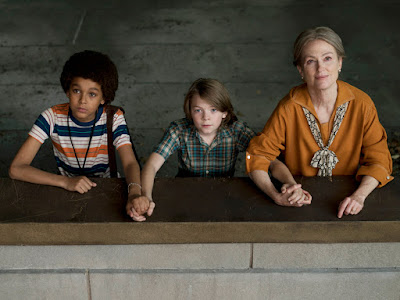 Based on a novel by Brian Selznick, Haynes's Wonderstruck tells parallel stories that evoke deeply human concerns, namely our ability to deal with loss and accept consolation. At its best, Wonderstruck showcases Haynes's ability to mix melancholy and nostalgia without succumbing to either. His movie can have the feeling of something dreamt.

One of Haynes's stories takes place in 1977 shortly after the death of a 12-year-old boy's mother. Once orphaned, Ben (Oakes Fegley) discovers a book called Wonderstruck among his late mother’s possessions. The book evidently was purchased at a New York City book store. A neatly placed bookmark suggests that Ben's father, a man the boy knows nothing about, gave the book to his mother (Michelle Williams in brief flashbacks).

Just as Ben dials the store to see if he can locate his dad, he's struck by lightning. As a result of the shock, Ben loses his hearing.

After a brief stay in the hospital in his home state of Minnesota, Ben sneaks away and hops a bus to New York City to continue the search for his father.

The movie's parallel story takes place in 1927 and involves a deaf 12-year-old girl (Millicent Simmonds) who, like Ben, heads for New York City. Simmonds' Rose tries to reunite with her mother, a star of silent films.

Cinematographer Ed Lachman shoots the 1977 segments in color; those in 1927 are shot in black and white.

While Haynes tries to get the feel of this parallel structure, the movie remains wobbly, but there’s little question that Wonderstruck aims to become a seriously lyrical helping of film. It succeeds in fits and starts.

Because much of the movie involves children, the child performers assume unusual importance. Simmonds, who’s actually deaf, acquits herself beautifully. But a lengthy scene in which Ben spends time with his new friend Jamie (Jaden Michael) in New York’s Museum of Natural History over-taxes both young actors and also stops the movie's flow.

When it’s working, we get hints of what Wonderstruck might have been: the 70s funk that Haynes finds in Manhattan’s streets; the melodramatic recreation of a silent film called Daughter of the Storm, and scenes in which Simmonds’ dazzled character arrives in New York City, having run away from Hoboken and a stern father (James Urbaniak) who clearly has no love for her.

Haynes couples a sense of childhood longing with notions about the importance of collecting items from the past, which explains why much of the movie takes place in museums. Toward the end, we even see a miniature model of New York City in a museum at the Queens, N.Y. site of the 1964 World’s Fair. The movie also includes a lengthy flashback that makes use of models and puppets to fill in some of the story's gaps.

Point of view shots that show us the world as seen but not heard by those who are deaf are intriguing, although they might have been even more effective had Haynes dropped Carter Burwell’s sometimes syrupy score.

Wonderstruck highlights its characters' need to acknowledge and get past painful loss without giving up on the mysterious wonder of existence.

Early on, young Ben reads a tone-setting Oscar Wilde quote his mother has pasted on her office wall. “We are all in the gutter, but some of us are looking at the stars.”
The idea that distant heavens lend awesome perspective to the shocking meagerness of our lives certainly carries weight, but in Wonderstruck the message can be more stated than felt. Enchantment is only half achieved.