A caustic look at the art world

Sweden's The Square takes us into a world where art and basic human values seem constantly to clash. 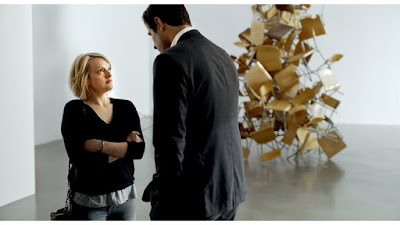 You could spend a couple of hours unwinding the many subjects addressed in Swedish director Ruben Ostlund's The Square. Ostlund, who shook up the art-house world in 2014 with Force Majeure, takes on the pretensions of the art world and the split between purported cultural values and simple expressions of humanity. He also tackles class divisions and the way a hopelessly elitist art world pushes itself toward weird extremes.

The Square of the title refers to an art space created outside of a museum of modern art in Stockholm. Inside the space, which actually is quite small, the atmosphere is supposed to be one of helpfulness and toleration, a tiny retreat devoted to trust and caring. Not surprisingly, the world outside the square turns out to be ridiculously corrupt.

Ostlund builds his story around the museum's curator. Claes Bang portrays Christian, a museum executive whose hypocrisy will be exposed as the movie unveils a series of episodes that sometimes amuse, sometimes confound and sometimes seem a little too on the nose to be as provocative as Ostlund may have intended.

If you're the sort of person who believes the art world is hopelessly out of touch with anything that concerns "normal" experience, you'll probably side with Ostlund as he poses a series of arty jokes. The main exhibit at the museum consists of piles of gravel assembled in the shape of small pyramids across a gallery floor. It's silly, of course, but just plausible enough to make us see why visitors to the museum might spend hours trying to tease possible meanings from these piles of rocks.

You may do the same with The Square. The movie is ambitious, scattered, funny, flawed and disjointed.

Say this, though, as the curator of the museum, Bang proves an able ringmaster as he presides over Ostlund's circus of a movie. American audiences also will recognize Elisabeth Moss, who turns up as a TV reporter doing a story on the new exhibit. Later, she climbs into bed with Bang's character.

Post sex discussion between the two characters hardly leans toward sweet talk, degenerating, instead, into an argument about who's going to throw away the condom the couple used. Perhaps a suspicious Christian thinks that Moss's character wants to set him up for a Lewinski-like dress moment. Who knows?

Did I mention that before the reporter and her subject have sex, a chimp wanders through Moss's character's apartment, creating both laughs and consternation? It’s one of the film's several WTF moments.

During the interview with Moss's character, Christian reveals that his major (and possibly only) concern centers on raising money for the museum.

That's not the only money-oriented moment in The Square. At a fund-raising dinner, a performance artist pretends to be a gorilla and winds up terrorizing the guests. This bizarre twist presumably is meant to show how much abuse viewers will tolerate if they believe they’re looking at art. The scene also exposes the ruthlessness that afflicts the art crowd. Under those tuxedos, monsters lurk. The whole scene would have made a spectacularly unnerving short.

Earlier, a couple of hip marketing geniuses persuade the museum’s staff that tolerance and compassion never will draw attention to The Square. To spice things up, they create a promotional video in which a girl is blown up. They wanted to give the project an edge.

Perhaps to knock Christian out of his protected cocoon, Ostlund includes a mugging in which Christian loses his wallet, his phone, and a pair of prized cufflinks. The resultant developments expose his silliness, as well as his inability to get beyond his own preoccupations.

So what to make of all this? Clearly, Ostlund has skills. He's a filmmaker who's interested in morality and responsibility, subjects that need plenty of attention at the moment. But in The Square, he's got so much on his plate that it takes him all of 2 1/2 sometimes taxing hours to unravel the movie's many threads.

As a result, The Square stands as a triumph of ambition that results in a wildly mixed achievement, water balloons dropped by a prankish director on the art world's many targets of opportunity.