A girl fights for her family's survival

The Breadwinner takes an animated look at life in Afghanistan under the Taliban. 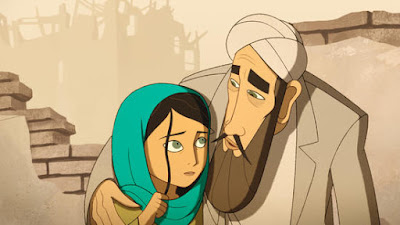 The Breadwinner isn't the first film to deal with the plight of Afghan women living under the Taliban (2003's Osama was devastating), but it may be the first animated feature to tackle such a difficult subject.

Irish director Nora Twomey, who co-directed the much-admired The Secret of Kells, takes us to Kabul for a story about Parvana (voice by Saara Chaudry), a girl whose father (Ali Badshah) is arrested for possession of a book the Taliban disdains. The young thug who betrays this peaceful older man has personal motives for his actions. Besides, we get the impression that any book, other than the Koran, would have offended Taliban sensibilities.

Parvana's mother Fattema (Laara Sadiq) and her older sister Soraya (Shaista Latif) don't know how they are going to survive because, as women, they can't even venture into the street unaccompanied by a male relative. This prohibition makes a dangerous ordeal out of such simple tasks as buying groceries or fetching water from the local well.

Early on Fattema, who's also caring for her toddler son, attempts to visit her husband in the forbidding prison where he's being held. She's badly beaten for her efforts.

It falls to Parvana to devise a solution to keep the family afloat. She cuts her hair, pretends to be a boy and begins to move about Kabul with new-found freedom. She also receives help with her ruse from Shauzia (Soma Chhaya), another girl who has adopted the same strategy as a means of coping with Taliban tyrannies.

The Breadwinner focuses on children but should not be considered a children's movie, even though older kids would do well to see it. It's a harsh story about what happens when fanatics terrorize a culture.

The story also puts special emphasis on the importance of storytelling as a means of helping people to survive terrible conditions. The movie opens with Parvana's father telling her stories about Afghanistan's past and includes a running fable that Parvana tells her baby brother. Parvana's story involves a boy who must try to save his village from the ravages of the evil Elephant King, a tale that roughly parallels Parvana's efforts to help keep her family afloat.

The animation is simple, sometimes involving cut-outs: Twomey's team creates a dusty picture of Kabul as a place where the life of the marketplace hasn't entirely been squelched.

The Breadwinner, which derives from a young-adult novel by Deborah Ellis, affirms Parvana's strength and determination and serves as a moving introduction to what it means for women to live under constraints that serve to subjugate and dehumanize them. Small but powerful, The Breadwinner qualifies as an adept telling of an important story.