In the town of Ebbing, Missouri, things aren't going well. 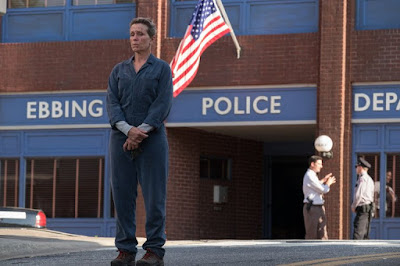 Mildred Hayes doesn't brood. After her daughter was raped and murdered on a stretch of lonely Missouri highway, Mildred ran out of patience with the local police for failing to locate a suspect and make an arrest. Mildred took matters into her own hands, renting three rundown billboards outside of her hometown of Ebbing, painting them red and advertising the fact that the police chief dropped the ball.

"Raped While Dying." "And Still No Arrests" "How Come Chief Willoughby?"

Mildred's bold move upsets the police and the townsfolk of Ebbing, Mo. But here's the thing: Mildred doesn't give a damn who she offends. She's angry, grief-stricken and intent on obtaining justice for her departed daughter.

Director Martin McDonagh's often funny third feature, Three Billboards Outside Ebbing, Missouri, brings the British/Irish director to the American heartland for a movie that proudly displays its wild variations in tone. Three Billboards makes its mark as a genre farrago: it's a dark comedy, a profane assault on authority figures, a diatribe about small-town hypocrisies and a comedy built around characters whose speech boils with profanities.

Frances McDormand receives showcase space from McDonagh as Mildred, a woman who spreads her venom the way bees pollinate flowers -- liberally. No one is spared: not the terminally ill Chief Willoughby (Woody Harrelson), not Mildred's son (Lucas Hedges), not her former husband (John Hawkes), an unreliable fellow who left her for a 19-year-old (Samara Weaving), and certainly not police officer Dixon (Sam Rockwell), a dim-bulb of a cop with a vicious streak and a reputation for racism.

The British born McDonagh (In Bruges and Seven Psychopaths) occasionally seems to be straining to hit notes of political incorrectness as he reveals the blatant homophobia and racism of some of his characters. But touching moments and genuine expressions of feeling also turn up as characters are brought face-to-face with their humanity -- often under terrible circumstances.

Whatever its ambitions, Three Billboards derives its charge to McDormand; Mildred is so furiously committed to her own truth that she doesn't hesitate to provoke, even tossing the local priest out of her home. Of course, Mildred's language proves significantly less polite than a simple invitation for the priest to leave.

The movie's intemperate characters sometimes soften: A bit of homespun wisdom emerges from an unlikely source or a touch of decency is expressed by a character such as Rockwell's Dixon, a comic-book-reading cop who may be too stupid to know how thoroughly reprehensible he can be.

To keep everything slightly off balance, McDonagh sometimes mixes brutal and tender sentiments in the same scene. His approach creates ragged edges, but, like his main character, McDonagh may not care. Three Billboards takes its cues from McDormand, who infuses Mildred with uncompromising strength, the kind that allows a formidable woman to go toe-to-toe with any man and strike fear into his trembling heart. She marches to her own drummer and is more than ready to knock down anyone who stands in her way.