A movie that sets off fireworks 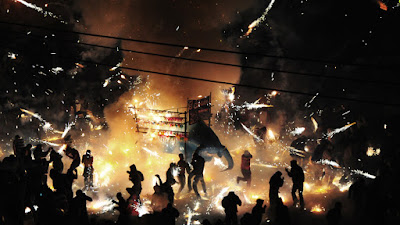 Tultepec, a town of about 92,000 people located about 20 miles north of Mexico City, goes crazy for fireworks. This obsession manifests most prominently during the annual celebration of San Juan de Dios, a holy figure who's venerated as the patron saint of fireworks makers. Fireworks, of course, have dual potential: They're beautiful to observe but also, dangerous. Brimstone & Glory, a documentary by Viktor Jakovleski takes us to Tultepec, where residents are preparing two massive displays: The Castles of Fire and the Burning of the Bulls, both highlights of the town's week-long fireworks festival. The peril becomes apparent when we see one town resident who has lost a hand to fireworks. He still helps make them. Early on, one of the young men helping to create a frame for a giant bull that will blaze with fireworks, says that no one who participates in what he calls "the running of the bulls" escapes without burns. The fireworks we see are amazing, and Jakovleski leaves it to us to decide what to make of this town's obsession with lighting up the sky for an event that evidently attracts upward of 100,000 visitors. I wondered why so many risk injury year-after-year, but most of the people we meet accept the town's commitment to fireworks as an essential part of a community event that celebrates local artisans. (A footnote: In December of 2016, after Brimstone and Glory was completed, a massive explosion in a Tultepec fireworks market resulted in 42 deaths.)