Denzel Washington as a savant attorney 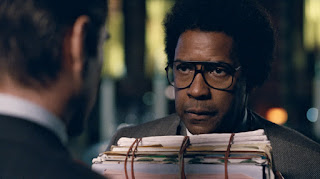 Roman J. Israel, Esq. makes room for moments that are so thought-provokingly enjoyable that the movie, which can't be called a success, may be more interesting than movies that would have garnered more praise. Denzel Washington creates one of his more memorable characters, a legal savant whose values and tastes are firmly stuck in the 60s. Washington's Israel sports an afro, baggy-ill fitting pants, and glasses a couple of sizes too big. Directed by Dan Gilroy (Nightcrawler), Roman J. Israel, Esq. is at its best when it's focused on this misfit of a man whose heroes include Bayard Rustin and Angela Davis. A key story element arrives early: Israel has spent 36 years working for a famous lawyer. Israel has been the backroom brains for William Henry Jackson, an attorney who knew how to handle himself in a courtroom. Jackson suffers a heart attack and slips into a coma, igniting a plot that brings Israel into touch with a hot-shot attorney portrayed by Colin Farrell. Farrell's George Pierce has been asked to dissolve Jackson's firm, which -- unbeknownst to Israel -- has never turned a profit. Israel also meets a civil rights activist (Carmen Ejogo). She sees past Israel's strange behavior and finds a righteous man. The plot puts Israel into a position in which he must decide how righteous he really is, a development the movie doesn't seem to know how to explore. For roughly half of its two-hour and 9-minute running time, Roman J. Israel, Esq. complies scenes that don't quite cohere. It's almost as if Gilroy, who also wrote the screenplay, can't figure out precisely what he wants to say. He compensates by giving Washington some scorching dialog and with a bit of cinematic daring, even employing some throwback style to evoke a feeling of '60s cinema. Roman J. Israel, Esq. emerges on one of the year's true oddities, a film that stumbles but, before it falls, hits notes you're not likely to hear anywhere else.*
As was the case with Wonder, I had a conflict with the preview screening of Roman J. Israel, Esq. and caught up with the film after its opening.
Posted by Robert Denerstein at 1:10 PM