Superheroes unite to save the world

Justice League may not be great, but it registers as OK. 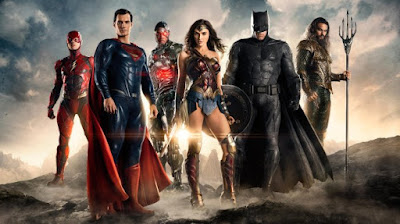 When I was a kid, the only thing I liked about getting haircuts involved the well-stocked stash of comic books that the neighborhood barber kept in his establishment. I consoled myself about the discomfort of itchy hair down the back and ungodly applications of hair tonic by visiting Gotham and Metropolis or maybe even Smallville, the town where Superboy was still finding his superhero legs.

I took solace for my impending misery in Clark Kent's square-jawed righteousness as a mild-mannered reporter for the Daily Planet and in Batman's colorful gallery of villains -- the Penguin and Joker. I loved the blocky apartment buildings that defined the urban landscapes of the cities where these Manichean dramas unfolded.

These were comics made for the clickety-clack of typewriter keys, for Clark Kent's fedora and for the overwrought prose of melodrama: "The Batman, having lost his way on a lonely by-road, stops before a lone house to ask directions. Suddenly, from the house comes a scream of a wild beast in pain ...."*

I get no such kick from the current wave of comic-book movies, which typically contain bloated action sequences that rely heavily on CGI, so much so that the villain in League of Justice, the latest entry from DC Comics, is a CGI creation called Steppenwolf. In tones that sound as if they've been augmented to suggest sonic boom, Ciaran Hinds provides Steppenwolf's voice.

Justice League, which brings together a quintet of superheroes (Batman, Cyborg, Flash, Wonder Woman and Aquaman) can be judged decent by current standards and it certainly represents an improvement over the somber and self-serious Batman v Superman: Dawn of Justice (2016).

This episode has been directed by Zack Snyder, who ceded control to screenwriter Josh Whedon when Snyder, who directed Batman v Superman, left the production to be with his family after the death of a daughter.

The resultant movie isn't nearly as dark as Batman v Superman and pretty much functions as a foundation for the next installment, as well as a lively introduction to several superheroes who are new to the big screen.

Early stages of the story involve Batman's attempts to assemble a crew to fight Steppenwolf, a villain in horned-helmet who's trying to gather three mysterious boxes so that he can unleash their power and bring about (what else?) the apocalypse.

This set-up requires the movie to do some quick backup work in the form of abbreviated origin stories for Flash (Ezra Miller), Cyborg (Ray Fisher) and Aquaman (Jason Momoa).

We already know Wonder Woman (Gal Gadot) and, of course, Ben Affleck's Batman. Not quite as gloomy as he was in the previous movie, Affleck's aging Batman isn't exactly charismatic, either.

These early sections work well and include the usual amount of extended action, which often seems more aimed at satisfying audience appetites for noise than advancing the story.

The main problem with the movie involves its villain, an off-the-rack menace who commands minions of flying, bug-like demons who feed on fear.

Gadot, who earlier this year established Wonder Woman as one of the best comic-book franchises, acquits herself well as a member of the emerging Justice League. Equally engaging is Miller, who has been given the lion's share of the movie's wisecracks. Another welcome presence, Momoa turns Aquaman into a tattooed rogue whose attitude ranges from casual to cynical.

The story unfolds against a backdrop of doom. Since Superman's death in Batman v Superman, villainy has erupted and the world has lost its knight in shining armor. Henry Cavill, who plays Superman, is listed in the movie's credits, but I won't tell you more about how the Man of Steel figures into the story.

The movie's superheroes must hold their egos in check and unite to conquer evil; saving the world proves to big a task for any single superhero. "Stronger together" didn't quite carry Hilary Clinton to the heights she hoped to scale and it doesn't totally work for Justice League, either, but the movie has entertaining elements and enough superhero chemistry to keep the DC wheel spinning toward the next movie.
*I have this quote on a Batman comics cover and linked to it. The link didn't take and I couldn't find the source again, but you get the idea about the overheated prose.