How Dickens wrote 'A Christmas Carol'

The Man Who Invented Christmas has a lively spirit. 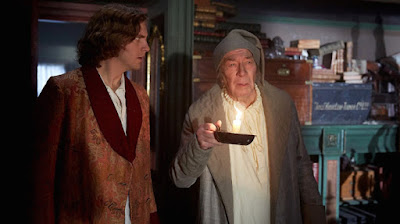 Few things are more boring than watching someone write unless it's watching some think through the kind of problems that can furrow even the most confident authorial brows during the creation of a written work.

Such is the obvious difficulty that confronted director Bharat Nalluri in making The Man Who Invented Christmas, the story of how Charles Dickens wrote his beloved A Christmas Carol.

To accomplish his task, Nalluri presents a series of scenes in which the great author tries out names in search of one that fits a character. He also shows Dickens meeting people in the real world who inspire characters who later appear in his fiction or tossing things about in his study as he agonizes about how to bring his story to its memorable conclusion.

Based on a book by Les Standiford, Nalluri's movie introduces Dickens during a period when, at the age of 31, he already had become famous. But after a trip to America, Dickens -- played in generally cheerful fashion by Dan Stevens -- was forced to deal with a couple of commercial flops, not to mention the high standard of living the author had set for himself.

What to do when sales of Martin Chuzzlewit fizzled? The movie's title, of course, tips us off.

Born of desperation and pressing monetary concerns, A Christmas Carol pushed its way into the holiday canon, a sheer act of authorial will. To show us exactly how this happened, Nalluri takes us into Dickens' study where the author meets and converses with characters who'll appear in the finished work. These "ghosts" or figments of Dickens' imagination (played by a variety of actors) don't always soothe the panic that besets the author as he struggles to finish the work in time to reach bookstores by Christmas.

I don't know if Dickens literally invented Christmas spirit as we have come to know it, but that's the notion that underlies the movie which gives the role of Scrooge -- as he evolves in Dickens' imagination -- to Christopher Plummer. Plummer makes a worthy addition to the gallery of embittered Scrooges who have been brought to the screen by any number of actors. (I still favor Alastair Sim in the 1951 version.)

While writing, Dickens also must attend to his domestic life. Morfydd Clark portrays Dickens' devoted but never subordinate wife, and Jonathan Pryce shows up as Dickens' father, a playful but fiscally irresponsible man who once, to Dickens' lasting shame, did a stretch in debtors prison.

Nalluri handles this difficult period in Dickens' life with flashbacks that build toward a not-so-surprising reveal about the indignities Dickens faced as a boy.

A fine cast of additional supporting actors keeps Stevens from having to fly solo. Justin Edwards portrays Dickens' agent John Forster. Dickens and Forster make a couple of visits to the Garrick Club, a writers' haunt where Dickens sometimes is tormented by another novelist, William Makepeace Thackeray (Miles Jupp). Few things, we presume, buoy a writer's spirits as much as the difficulties faced by a rival.

We also find Dickens befriending and then offending one of his servants (Anna Murphy), an uneducated young woman who nonetheless has a sharp taste for stories.

Simon Callow adds late-picture tang as John Leech, the renowned illustrator who did the artwork for A Christmas Carol.

For all of Nalluri's invention, watching Dickens develop his story becomes a bit repetitive, and those who believe that someone other than Dickens actually invented Christmas may be surprised by the movie's reminder that Christmas wasn't always celebrated with decorated trees, plum pudding and gifts. Nalluri and screenwriter Susan Coyne treat the matter with a throwaway line when a character wonders why Dickens wants to make such a fuss over a "minor holiday."

I can't say that The Man Who Invented Christmas will (or should) hang at the top of anyone's cinematic tree, but, at its best, the movie has a lively spirit that keeps us from crying "Humbug."