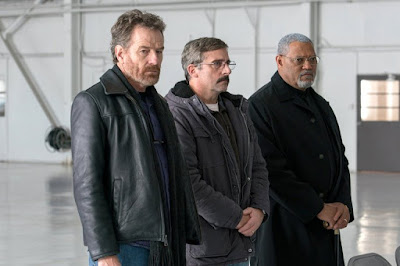 In director Richard Linklater's Last Flag Flying, three Vietnam veterans reunite for a sad task. One of them has lost a son in Iraq. The mission: To bury a young Marine.

Two former Marines are played by Bryan Cranston and Laurence Fishburne. Steve Carell 's Larry Shepherd -- nicknamed Doc -- served as medic in the Navy and wound up alongside Cranston and Fishburne's characters in the heat of Vietnam combat.

Last Flag Flying is based on novelist Darryl Ponicsan's sequel to The Last Detail, which was made into a 1973 movie starring Jack Nicholson, Randy Quaid and Otis Young. Ponicsan co-authored the screenplay for Last Flag with Linklater, and the movie has some (but not all) of Last Detail's comic bite.

It's 2003: The movie's principals may have thought that their war-time experiences were safely locked in the vaults of the past, but their journey forces them to come to grips with their war-time behavior as well as with the nature of the sacrifices all young men make when they go off to war.

Low key and steeped in the kind of naturalism Linklater favors, the director's moderately affecting look at the deep-rooted impact of war begins when Doc tracks down Cranston's Sal Nealon, a boisterous fellow who owns a Norfolk, Va., bar where he seems to drink as much as he sells. The two then set out to find Fishburne's Richard Mueller, a tightly wound former Marine who has tried to push the war and his wild youth out of his consciousness. He has become a reverend.

Doc, who was dishonorably discharged from the Navy, is younger than the others and going through a particularly bad patch. Not only has son been killed in action, but he recently lost his wife to cancer. Doc refers to his Bad Conduct Discharge (BCD) as a Better Career Decision, but it's clear that the military made Doc something of a goat. Doc has not had an easy time of it, but somehow has avoided trapping himself behind bars of bitterness.

Questions arise about how Doc's son died. The Marines want to enshrine the young man as a hero, but the details of the young man's death turn out to be more horrific than heroic.

When Doc learns the truth, he refuses to have his son buried in Arlington National Cemetery. Despite the urging of a Marine colonel (Yul Vazquez), Doc won't allow the Marines to propagandize his son's death. He insists on burying the boy in his hometown of Portsmouth, New Hampshire.

Military protocol requires that the young man's body be accompanied to its resting place. J. Quinton Johnson plays the young Marine assigned to this grim task: He joins the three older men as they make their way north from Delaware, where they have traveled to pick up the body.

As is the case with any road movie, the personalities of the men emerge as the trip unfolds: Cranston's Sal is happily boorish; Fishburne's Mueller has given up drink and tried to live a life of serenity and prayer, but you get the feeling that his newfound propriety can't entirely protect him from his past. "Doc" proves the quietest of the trio, a man whose soul droops with the weight of grief and regret. Doc found stability and peace in family life -- but, now, even that has been taken from him.

There's plenty of bickering as the men move toward the movie's sad finale, and some of the screenplay's bits feel labored: Sal's attempts to bring his compatriots into the 21st Century by buying them cell phones, for example.

Linklater mutes any political messaging. By the end, he makes it clear that these men aren't interested in honor or even patriotism. They claim a devotion to the Marine Corps, but what they really seem to cherish is their relationship to one another, bonds forged by a shared experience none of them ever will fully digest and which always will threaten to consume them. Still, like the Dude in The Big Lebowski, they abide -- psychic wounds and all.