Branagh directs and stars in Murder on the Orient Express, but his version of the 1934 Agatha Christie novel seldom clicks. 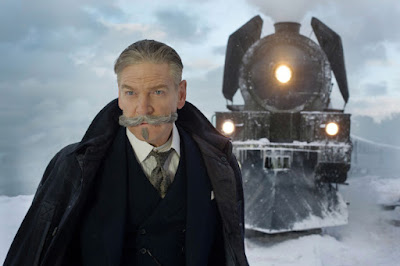 I'd be lying if I told you that I recall every detail of director Sidney Lumet's 1974 hit Murder on the Orient Express, but I do remember that the movie was fun. Albert Finney appeared as the great Belgian detective, Hercule Poirot, heading an all-star cast that included Lauren Bacall, Ingrid Bergman, John Gielgud and Sean Connery.

The trouble with Kenneth Branagh's new version, which stars Branagh as Poirot, is that the movie can't wring enough enjoyment out of the journey from Istanbul to Calais -- not for the train's passengers and, more importantly, for us.

Murder on the Orient Express mostly serves to showcase Branagh's turn as Poirot in his version of Agatha Christie's classic 1934 mystery, and, no, Branagh isn’t as good as Finney.

Before the preview screening of Orient Express, I wondered why Branagh had bothered to remake it. After the movie concluded, I could find no special reason for him to have taken another go at material that also has yielded a 2001 TV movie in which Alfred Molina portrayed Poirot.

Branagh tries to provide visual bang for the buck with exterior shots of the mountains across which the train speeds, an avalanche that derails the engine, and even a few scenes outside of the train. The drama’s resolution takes place in a tunnel where the suspects are lined up at a long table as if they were about to stage a news conference.

I tired of Branagh's Poirot, particularly given the movie’s monotonous structure: Poirot interviews suspects (i.e., the supporting cast) one after another, each appearing in perfunctory fashion as if Branagh is following a time table rather than a script.

Nothing, of course, is as it seems, but Branagh doesn't optimize the participation of a strong cast. Only Pfeiffer comes close to receiving her own small showcase. Mostly, the supporting characters fail to generate keen interest.

For those who haven't read Christie's novel or seen the 1974 movie, there's no point spoiling the mystery, although it's worth noting that lots of attention seems to have gone into the movie's production design, creating the illusion that we're on a most opulent journey.

When Poirot finally solves the mystery, the movie hits its stride, but much of Orient Express proves a snooze-worthy ride in the company of a morally insistent detective who so values balance that he only eats eggs of precisely the same size.

If the light from your mobile device weren't likely to disrupt the experience of others, I'd suggest that this is one journey on which you might consider bringing a book -- perhaps something by Agatha Christie.