A coming-of-age movie with smarts 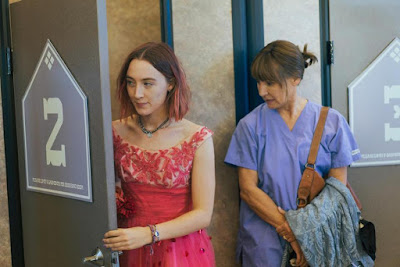 Lady Bird was so rapturously received on the fall festival circuit that when I finally saw this enjoyable coming-of-age movie, I was slightly taken aback by a level of critical enthusiasm that, for me at least, seemed excessive. I'll put some emphasis on the word "slightly" because I did find Lady Bird entertaining and worthy, a smart movie that picks its way through a well-worn genre without engendering any of the contempt usually bred by familiarity. That's because the movie's writer/director Greta Gerwig has a singular sensibility and because Gerwig, who does not appear in the movie, seems to be mining her own adolescent memories.

I don't know how much Lady Bird adheres to Gerwig's life, but the movie has been made with the kind of affectionate observation that suggests a strong connection between this fictional account and the reality of Gerwig's teen years.

To fully appreciate what Gerwig has accomplished, it's necessary to understand what she hasn't done. She introduces but doesn't overplay the story of a teenager who suddenly becomes friends with an attractive, popular girl and, as a result, ignores her best friend, someone who'll never be Homecoming Queen.

She includes a scene in which the movie's main character -- played by the emotionally supple Saoirse Ronan -- loses her virginity and winds up disappointed, a familiar teen-movie ploy but one that's freshened by Gerwig's idiosyncratic take on the collision between romantic expectation and reality. There's even a prom, but that, too, has its own off-kilter charms.

Although it doesn't always occupy center stage, the key relationship in Lady Bird revolves around Ronan's character and her mother, a psychiatric nurse played by Laurie Metcalf. The central issue in that relationship involves a mother's accusatory view of her daughter's aspirations, a sense that Ronan's Lady Bird (the name the character has chosen for herself) might be dreaming too big and, thus, heading for inevitable disappointment.

For her part, Lady Bird wants to escape what she views as the stultifying confines of Sacramento to attend college in the sophisticated East. Her mother wants her to stay closer to home, a preference that's not only geographical but metaphorical. Mom, who lives a conventional life with her newly unemployed husband (a fine Tracy Letts), may be envious of her daughter's desire to escape the weight of obligation.

The fact that Lady Bird -- a.k.a. Christine McPherson -- attends a Catholic high school adds more flavor. Happily, Gerwig resists caricature, presenting the school's faculty with sympathetic humor. Sister Sarah Joan (an amiable Lois Smith) displays unexpected humor. Father Leviatch (Stephen Henderson) runs the drama club but is subject to bouts of depression. When Father Leviatch takes a leave of absence, the junior varsity football coach (Bob Stephenson) substitutes, preparing the cast for a production of The Tempest as if he were giving a half-time pep talk to a roomful of jocks.

One of the movie's best scenes occurs when Lady Bird meets with Sister Sarah Joan to discuss her college essay. Sister Sarah observes that Lady Bird has written affectionately about Sacramento, the city she purportedly loathes. Lady Bird says that she guesses that she pays attention, and Sister Sarah comments that paying attention qualifies as a form of love.

The boys in Lady Bird's life become part of her growing-up process. Lucas Hedges, familiar from Manchester by the Sea, portrays Danny, a star of high school musicals. He becomes Lady Bird's first boyfriend, but the relationship takes a turn Lady Bird fails to anticipate.

Lady Bird later develops a relationship with Kyle (Timothee Chalamet), a teenager who seems to have watched too many James Dean movies, internalizing an alienated pose.

Nice work from Odeya Rush as a Jenna, the unbearably popular girl, and from Beanie Feldstein as Julie, Lady Bird's BFF and the total opposite of Rush's Jenna.

Gerwig, familiar as an actress from movies such as Francis Ha, has made her directorial debut with an easy touch that results in a crowd-pleasing entertainment. The best compliment I can give Lady Bird is to insist that it’s a movie about a particular teenager rather than another entry in Hollywood's endless stream of generic and often dim-witted coming-of-age movies.

Happily engaging and marked by Ronan's wit and vulnerability, Lady Bird introduces us to a young woman who's taking small and large steps on one of life's more exciting journeys: discovering herself.