A love of Springsteen changes his life

Blinded by the Light takes an upbeat, energetic look at how a young Pakistani man awakens to life. 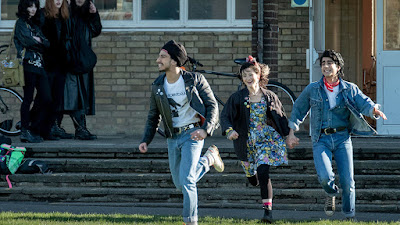 At its best, Blinded by the Light is the exuberant movie that Yesterday should have been. In director Gurinder Chadha's lively look at the influence of popular music on an impressionable young man, a Pakistani student (Viveik Kalra) finds his life transformed when he discovers the music of Bruce Springsteen. Timid and dutiful, Kalra's Javed opens the door to what he regards as a richer life and begins to live in what you might call "The World According to Bruce."

Springsteen's music does what only music can do: It awakens Javed's dormant sensibilities and tells him that the world contains much more than he knew or imagined. He's not just listening; he's experiencing a revelation.

Chadha (Bend It Like Beckham) brings a light touch to the movie's developments as she sketches in Javed's romance with a young woman (Nell Williams) he meets at school and his friendship with the young man (Aaron Phagura) who turned him onto Bruce in the first place.

Based on a memoir by Sarfraz Manzoor, Blinded by the Light uses Springsteen's music to help Javid fully understand the limitations of life in the bland town of Luton where he's sometimes bullied by neighborhood toughs and where his stern father (Kulvinder Ghir) has difficulty finding his footing after being laid off from the GM plant where he toiled for 16 years.

Ghir's Malik has no use for the poetry that Javed begins to write. He wants his son to arm himself against deeply ingrained British prejudices that he believes must break Javed's heart. But one of Javed's teachers (Haley Atwell) encourages the young man to keep searching for his voice. The year: 1987.

Kalra holds the screen with Javed's new-found avidity and his unshakable faith in the vision that Springsteen's music -- liberally used throughout -- opens for him. It's refreshing that Javid doesn't aspire to be a musician. He doesn't want to be Bruce; he wants to see like Bruce. He aspires to reach the level of feeling that he hears in songs such as Born to Run. Music empowers him, almost as if he's riding a wave created by Springsteen's liberating energies.

It's all very naive, of course, but this kind of naivete is precisely what the movie's remembering and, ultimately, celebrating.

Before Blinded by the Light ends, Chadha kneels too deeply at the altar of sentiment and she sometimes indulges a level of corniness the material doesn't require but Blinded by the Light survives those impulses and asks us to share its appreciation for Springsteen's music and, by inference, the magic music can work in the hearts of the young.