A look at the complications that ensue from a tryst between an Israeli woman and a Palestinian man. 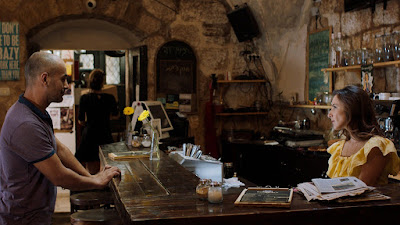 Saleem and Sarah are having an affair. She owns a small cafe in Jerusalem. He delivers baked goods to the cafe. Both are married to other people and neither seems interested in abandoning his or her family. She’s the mother of a young daughter. He’s about to become a father.

So what’s this relationship about? Maybe nothing more than sex and novelty. Maybe Saleem and Sarah are turned on by risk. Palestinian director Muayad Alayna isn’t especially interested in what brought these two people together; rather, he dramatizes the dangers that arise when lines are crossed by people who live on opposite sides of an explosive cultural, religious and political divide.

Alayan bases the prosaically titled Reports on Sarah and Saleem on a real-life story that allows him to deal with the ramifications of an affair that exposes each of its participants to unexpected consequences.

Saleem (Adeeb Safadi) resides in East Jerusalem but also makes some deliveries in the West Bank for his brother-in-law (Mohammad Eid), a well-connected fellow who offers Saleem a chance to earn extra money. A trip to Bethlehem with Sarah (Sivane Kretchner) sparks a bar fight that produces a series of events that lead to the jealous Saleem's arrest by the Israelis.

Further complicating matters, Kretchner's Sarah is married to an Israeli colonel (Ishai Golan) who deals with security matters. What will happen if he learns that his wife has been sleeping with an Arab-Israeli who has fallen under suspicion of spying on the Israelis?

For her part, Saleem's pregnant wife (Maisa Abd Elhadi) must face difficult truths about her husband; her character grows in strength as the movie unfolds.

The movie's complications and coincidences sometimes feel far-fetched. But considering where Sarah and Saleem live, we're willing to go along with the story, and Alayan winds up with a movie that sometimes ties us and his characters in knots.