This 'Nightingale' sings a brutal song

A 19th century story that packs a terrible wallop. 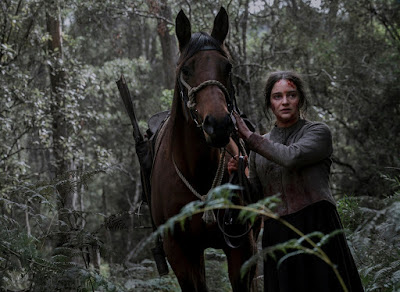 Every moment of brutality in The Nightingale, a follow-up feature from Babadook director Jennifer Kent, lands a hard blow. Set in 19th century Tasmania, Kent's story proves gripping from its horrific beginning to its violent end.

Kent visits a time when Tasmania served as a dumping ground for convicts from England and Ireland. The British soldiers who policed Tasmania viewed these convicts as subhumans who could be used, exploited and abused.

The story centers on Clare (Aisling Franciosi), a former Irish convict with a beautiful singing voice and a job at a small tavern.

Clare lives with her husband Aidan (Michael Sheasby) and their new baby daughter in what should be the hopeful beginning of her post-prison life. But Clare isn't truly free. She's harassed by Lieutenant Hawkins (Sam Claflin), an officer who believes that Clare owes him any sexual favor he might demand. He's the one who got her out of jail. He regards her marriage as a joke. His entire personality reflects a sense of British privilege and colonial cruelty.

The vicious act that ignites the rest of the movie occurs when Hawkins rapes Clare. Difficult to believe, but things get worse from there. I won't say exactly how an already horrible situation further deteriorates but Kent presents each of the movie's brutal turns in high-impact scenes that may cause some to avert their eyes.

Kent shifts the story into revenge territory when Clare hires an Aboriginal guide (Baykali Ganambarr) to help her track down Hawkins and his crew. After wrecking Clare's life, Hawkins heads north to claim a promotion that the local captain has denied him because of behavior unbecoming of an officer. True to form, Hawkins will not be denied.

A revenge saga, yes, but one that's not engineered to dish out the kind of programmed satisfaction we've come to expect in male-dominated revenge sagas. The violence in Kent's movie isn't intended to elicit cheers; it's appalling.

Racial dynamics also emerge. Clare initially lords it over Ganambarr's Billy. She calls him "boy," disrespects him and tries to bully him into submission. But she also knows, she can't navigate her way through the outback without him.

For his part, Billy understands that the whites treat his fellow tribesman with astonishing cruelty and have no appreciation of Aboriginal culture. They've stolen his home. To Billy, the whites are uncivilized barbarians, and -- at least initially -- Clare is one of them.

It takes time for Billy and Clare to form a bond based on their common acknowledgment that Hawkins (an emblem of British colonial rule) poses a twisted threat to each of them.

Kent adds tough encounters that lead the way to the movie's conclusion, a bit too drawn out, but still powerful enough to leave you wrung out.

Posted by Robert Denerstein at 8:35 PM