'Angel Has Fallen' so far, it touches bottom

Gerard Butler reprises his role as a Secret Service agent, this time one who falls under suspicion. 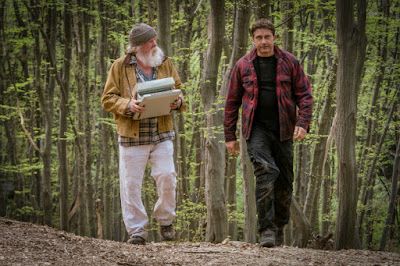 Looking heavier and a good deal more shopworn, Gerard Butler returns to the big screen as Secret Service Agent Mike Banning, a character he has played two times before -- once in Olympus Has Fallen (2003) and again in London Has Fallen (2016). Mention Butler's name and something is bound to fall.

As his job description makes clear, Banning must protect the president of the United States, played initially by Aaron Eckhart and in this latest edition by Morgan Freeman, whose job descriptions have grown more exalted as the series progressed. Freeman began as speaker of the house, graduated to vice president, and this time emerges in the nation's top job.

Hold the congratulations. For Freeman's Allan Trumbull, the steady rise to power has not been entirely beneficial. In Angel Has Fallen, the president spends much of the movie in a comatose state after being severely wounded in a wild assassination attempt that takes place during a fishing trip.

Perhaps to freshen the proceedings, Butler's Banning has begun to suffer a crisis of confidence. He experiences the lingering effects of concussions and wonders whether it might not be time to abandon his action-packed life. I'd just have soon followed Banning's retirement than the ridiculous journey on which Angel Has Fallen takes him.

Blamed for the assassination attempt, Banning becomes a hunted man with an FBI agent (Jada Pinkett Smith) trying to bring him to justice. As a fugitive, Banning seeks refuge with the father (Nick Nolte) from whom he's long been estranged. Nolte arrives in the movie as a growling recluse who acts as if he's been politicized by survivalists: His character natters on about the way governments get their hooks into people and won't let go. His foul temperament evidently resulted from his service in Vietnam, where he also learned a lot about planting mines and blowing things up.

Freeman and Nolte are both wonderful actors and it pains me to watch them ply their skills in a meat-grinder affair with an idiotic plot in which the villains are easily spotted.

The rest of the cast doesn't add a lot. Danny Huston joins the proceedings as one of Banning's former military pals; Tim Blake Nelson appears as the nation's vice president, the man who must take over while an unconscious Trumball teeters on death's doorstep. Piper Perabo plays Butler's loyal wife; she sticks by him even when he falls under suspicion.

Director Ric Roman Waugh earns his action bones with a massive drone attack that occurs early in the movie, a kind of prologue to the more mundane grunts and groans of subsequent fights. A late-picture battle in Washington, D.C. makes you wonder how it escapes the prying eye of local TV stations.

No point belaboring this one; Angel Has Fallen is a bit of late-summer B-movie junk; i.e., a movie of low-level smarts and high body counts. You won't need a high-level security clearance to figure this one out long before it crosses the finish line.