Buddies on the road -- and on the water

A country boy and a young man with Down syndrome team for a fairy tale of an adventure in The Peanut Butter Falcon. 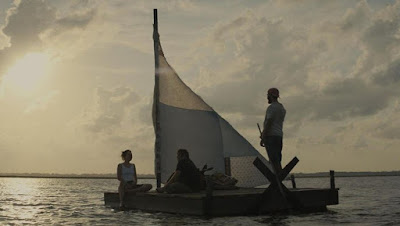 We've all seen enough bromances to last several lifetimes. But that doesn't mean anyone plans to retire a genre that continues to connect with audiences.

The Peanut Butter Falcon arrives in theaters as a buddy movie -- but one with a difference. It teams Shia LaBeouf, as a red-neck renegade, with a young man with Down syndrome, played by Zack Gottsagen, an actor who really does have Down syndrome and for whom the movie was written.

LaBeouf's Tyler and Gottsagen's Zak make a typically unlikely duo. Tyler's on the run from a couple of guys (John Hawkes and Yelawolf) who want to kill him for messing up their crab-fishing business. He's also troubled by the death of his older brother (Jon Bernthal).

To hit the road, Zak must escape from the nursing home where he's being housed, no other placement being available. Zak's roommate (Bruce Dern) helps the young man engineer the breakout that leads to his hook-up with Tyler.

A nursing home volunteer (Dakota Johnson) follows. She's supposed to return Zak to the home. She also adds feminine energy to the generally masculine proceedings, which are heightened by Zak's burning ambition. He wants to be a professional wrestler and dreams of visiting a training school run by his idol, a wrestler who goes by the name of Salt Water Redneck (Thomas Haden Church).

Shot in the Florida Panhandle, the movie -- a passion project from first-time directors Tyler Nilson and Michael Schwartz -- relies heavily on the chemistry generated by a fully committed LaBeouf and by Gottsagen, a natural charmer with a robust sense of humor.

They're playing two characters who are thrown together for an adventure that includes a raft trip and an encounter with a backwoods preacher (Wayne DeHart) -- all spaced over sufficient time to allow LaBeouf and Gottsagen to develop a conspiratorial bond, two against the world.

Peanut Butter Falcon, which avoids gooey sentiment, takes its fanciful title from the name Zak chooses for his wrestling alter ego. The title proves suggestive; this is a movie that isn't afraid of its sometimes goofy appeal.

To fully enjoy Peanut Butter Falcon, it's probably best to set aside demands for total plausibility and accept the movie as a fairy tale about what it means to be young and feel free.

And -- at least to my knowledge -- The Peanut Butter Falcon is the only film in the long history of cinema that includes a scene in which the characters cook a fish, smear it with peanut butter and eat it. That moment, I should point out, marks the only time I felt sorry for anyone in the movie.